Realme is one of the fastest-growing smartphone companies in the world, and there’s more to its success than just attractively-priced hardware. The other side of the coin is software, and Realme phones have a lot to offer in this department too, with plenty of useful features and impressive customization options.

The uninspiringly named Realme UI is on its second major iteration now, based on Android 11 and still very closely aligned with sister company Oppo’s ColorOS. While there aren’t too many phones running it just yet, these are some of the best features you should check out when you get your hands on Realme UI 2.0.

There are times you may want to use another app but not close the one you’re currently using. Realme UI 2.0 makes this possible with mini and floating windows that can be activated from the overview menu.

The buttons don’t show up in the GIF because the screen-recording tool couldn’t capture them.

Tap on the two-dot menu icon to find the options for mini and floating windows, or simply tap and hold the app in the overview for a few seconds and swipe down to the buttons that pop-up. You can even stow away apps when you don’t want them to take up space and reopen them with a simple swipe.

This is one of those underrated smaller features that all add up to make an intuitive user experience. By default, newly installed apps get added to the homescreen, but they don’t take up the space left behind by uninstalled apps. Usually, fixing this is a cumbersome process, especially if you’ve got plenty of empty space.

Realme UI has a baked-in gesture that lets you neatly align all your apps either to the bottom or the top of the screen. Just long-press on your homescreen and swipe up or down. That’s it!

This new quick share button within the camera UI makes it so much quicker if you want to post the photo you’ve just taken on social media.

Once you’ve snapped an image or shot a video, simply swipe up on the preview to get options to edit or share it — no need to open the media first. This isn’t a complex feature, but it’s a thoughtful one that speeds-up one of the most common workflows.

Don’t like the default blue accent color? Choose from a bunch of other presets. Want to add/remove rows and columns from your homescreen? Sure thing. Don’t like the icon shape and size? Not a problem. All these options can be accessed in just a single menu, and you can even preview the changes, making it really convenient.

You can select three different hues, from an “enhanced” black to a “gentle” gray. There’s also an option to adjust icons and wallpaper to dark mode, and force third-party apps to follow the system theme.

Realme UI 2.0 has one of the most powerful screenshotting tools of all skins out there.

You can take standard rectangular screenshots like any other phone, but Realme UI also does circular or free-form ones. There’s a useful toolbar at the bottom that gives you quick access to features like doodle, scrolling screenshots, and the share menu. Even the screen-recording tool offers an impressive buffet of controls, including the ability to select the frame rate and the bitrate of the resulting video.

Unless you have the self-restraint of a saint, there’s a good chance that your smartphone usage has had a significant impact on your sleep. Unsurprisingly, Realme has an app for that. Sleep Capsule helps you regain control by restricting your smartphone use during predefined hours, and you can whitelist certain apps if you absolutely need them. It’s different from other implementations like Digital Wellbeing in that it only gives you three chances in a month to override the restrictions. Helpful for those who constantly break their own rules.

Once you dry those up, you’ll have to wait for the next month to get those three lifelines again. While you can disable the feature altogether when not in use, you won’t be able to get out of it if it’s already activated and you’re out of overrides, so proceed with caution.

If you’ve ever wanted to share music with someone sitting right next to you, Realme UI’s dual-mode audio is what you need.

This feature lets you pump music from two sources — wired earphones and Bluetooth earphones — at once. It works pretty well and can be quickly accessed via the volume menu.

If you think it might be cool to have two different phones, Realme UI 2.0 allows you to mimic the experience with with its software.

System Cloner lets you set up a separate account although you can still choose to make data from one “phone” available on the other one. It’s also possible to lock each system with a unique passcode/fingerprint, making both easily accessible from the lockscreen. This could be a good way to separate your work and personal life if you find the two overlapping in undesirable ways.

While I haven’t been able to play around with this myself (it’s unavailable on my Realme 8 Pro), certain devices running Realme UI 2.0 will have the option to customize the always-on display. 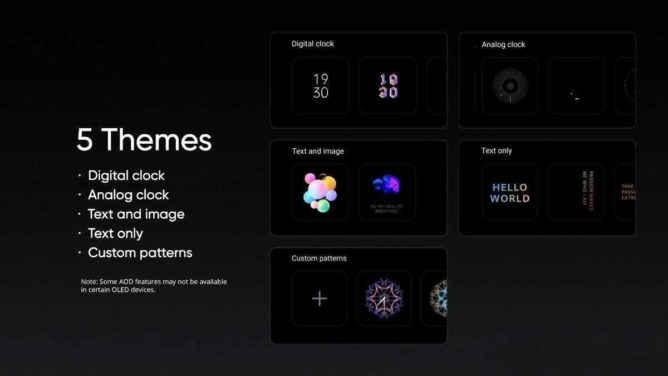 You can either choose from the various presets or customize the design to suit your style. Pretty neat addition, IMO, assuming it works as well as everything else in Realme UI.

Those are my picks for 10 Realme UI 2.0 features worth checking out — let me know if you have any other recommendations down below.