It’s no secret that Chrome OS has been improving over the last several months. With skyrocketing sales contributing to increased polish in Google’s operating system, 2021 is shaping to be a good year for Chromebooks — and Chromeboxes, too. CTL’s CBx2 impressed us when we reviewed it, nailing the basics down at a reasonable price. That’s not the only new Chromebox in town. Asus has an updated Chromebox 4 hitting the market, offering a wicked-fast processor, ample storage, and killer networking performance. It’s a great follow-up to the popular Chromebox 3 for anyone who needs a powerful Chrome OS desktop for business and personal use.

The Asus Chromebox 4 is a modest-looking mini PC that sports a boxy, utilitarian design. While its matte plastic chassis is less premium than the brushed aluminum on the Chromebox 3. The unit isn’t much larger than most computer mice, and it comes with a VESA mounting kit if you want to save even more space in your office. The large power button is the best part of its design: when mounted behind a monitor, the switch faces upward, making it easier to reach over to power on the Chromebox.

At the heart of the Asus Chromebox 4 is an Intel Core i3-10110U Comet Lake CPU, a dual-core mobile processor clocked at 2.10 GHz. It’s snappier than the Celeron chips found in budget Chromeboxes, but a handful of Google Docs tabs is enough stress to get the main CPU fan going. While the fan is slightly louder than the CTL’s CBx2 we reviewed a month ago, it doesn’t turn on as frequently. The two large intake vents on the bottom help it keep cool, with a long exhaust vent in the back to dissipate heat.

The Chromebox 4 will be refreshing if you’re sick and tired of high-end laptops that include just two or three USB ports. You’ll find four slots on the front of the unit: two USB-A 3.2 Gen 1 ports, one microSD card slot, and a headphone jack. On the back side of the unit, there are nine ports: three USB-A 3.2 Gen 2, one USB-C 3.2 Gen 1, two HDMI 2.0, one LAN (RJ45 port), a barrel jack for power, and a Kensington lock to protect your Chromebox from theft. 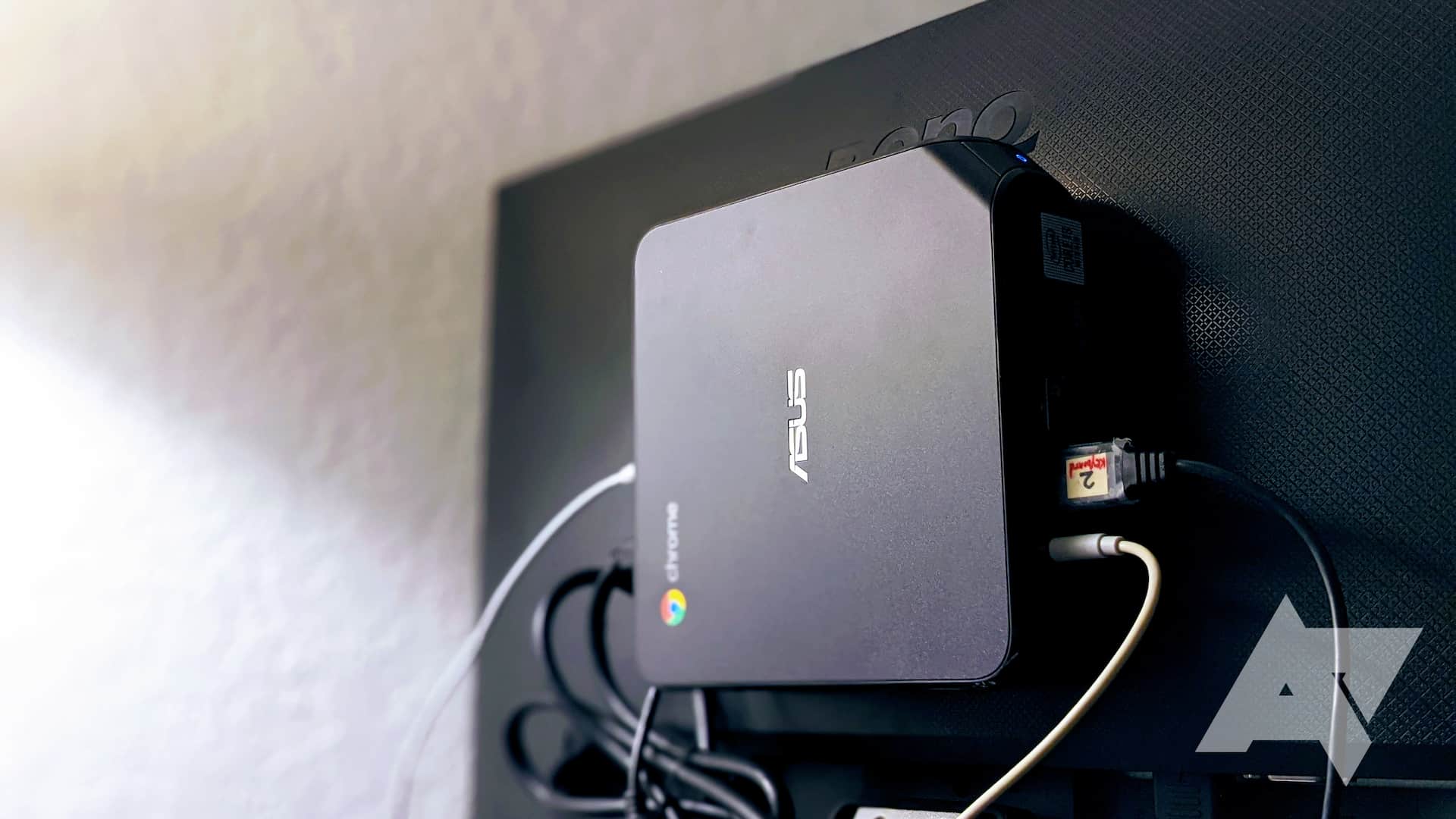 The Chromebox 4 comes with a VESA mount, a 90-watt power supply, and the expected manuals and warranty cards. Unlike the Acer Chromebox CXI3 we reviewed, the unit does not come with a keyboard or mouse. 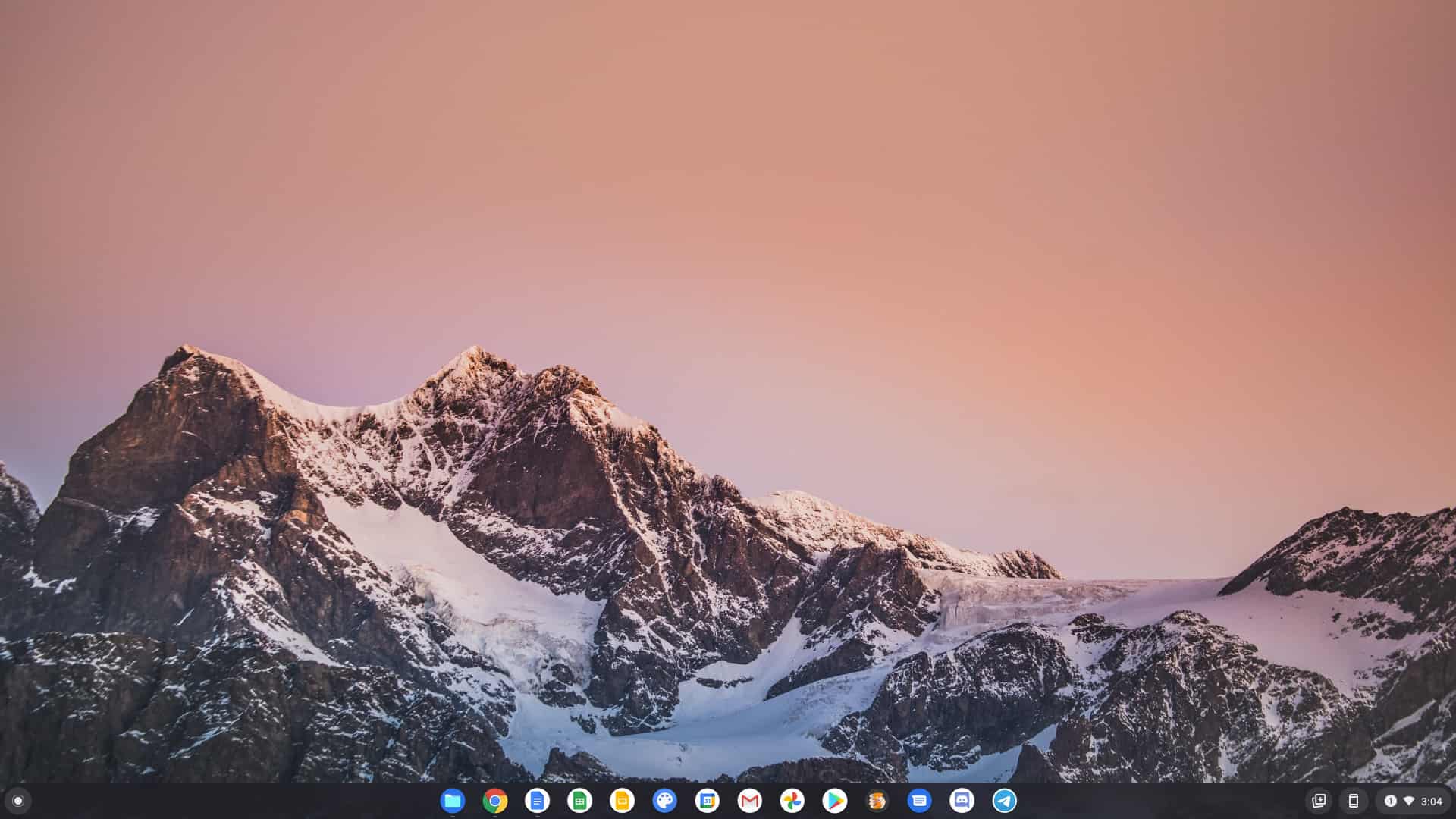 The Chrome OS story remains unchanged with the Chromebox 4. Google’s operating system is becoming more capable every year, with powerful multitasking features like virtual desks and a slew of Android and Linux apps at your disposal. Viruses and malware are non-existent, and Chrome OS updates in the background to ensure your system is running smooth and secure. Like the CBx2, the software on the Chromebox 4 is identical to every other Chrome OS machine, skipping the bloatware found on traditional Windows machines for a lean, vanilla experience shipped by Google.

When powering the Chromebox for the first time, Chrome OS prompted me to update the system to the latest software. Setting up my Google account was painless, and the machine was fully configured within minutes thanks to Google’s comprehensive account sync — Microsoft should start taking notes.

There are some annoyances when using Chrome OS on a non-touch desktop, though. For example, cycling through the drawer is clunky with the mouse wheel, and the tiny page buttons are hard to click. It’s cumbersome and unintuitive to manage notifications in the system tray, too. These things are true of all Chrome OS devices, so there’s little Asus can do here. 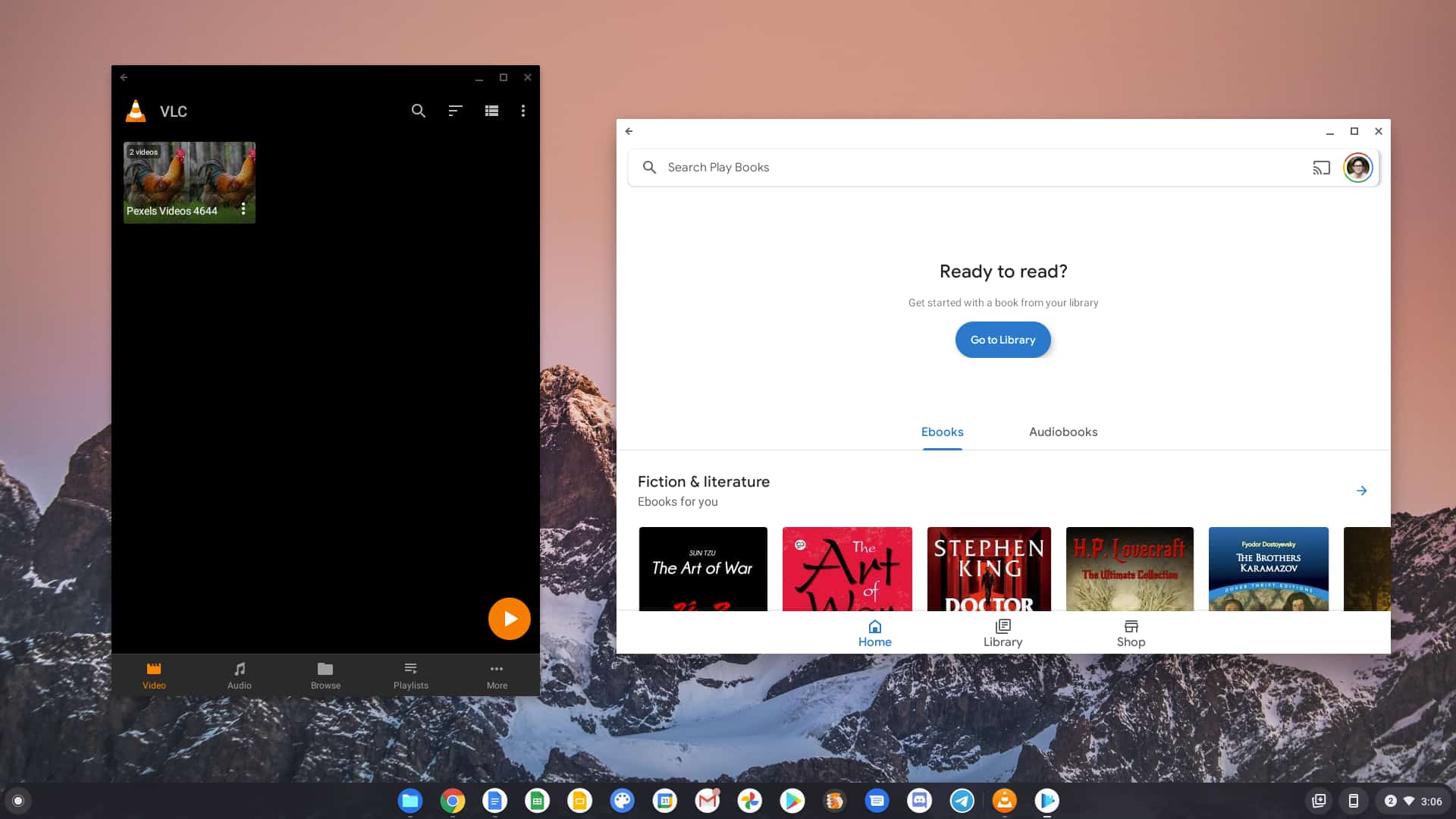 Android app support in Chrome is nice to have in a pinch, but don’t buy the Chromebox 4 specifically for that. Chrome OS runs Android 9.0 Pie in a container, lagging two years behind the latest stable version. The lackluster scaling, app crashes, and awful mouse support continues to hurt the platform — particularly on Chromeboxes that don’t have touch screens. I’m hoping that most of the issues will get ironed out when Android 12 lands, but for now, don’t get your heart set on running Android apps on this machine. 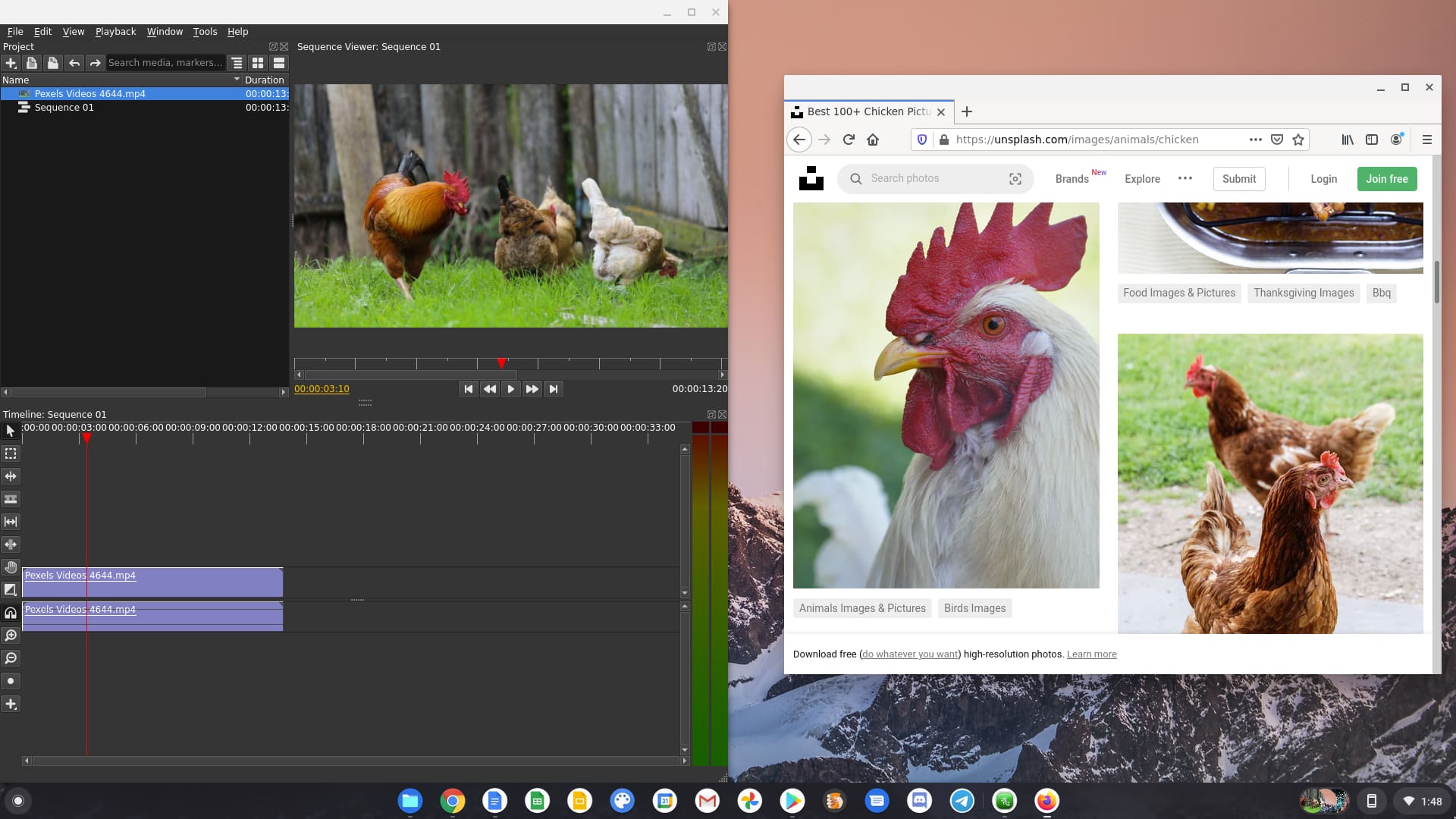 On the flip side, Asus’ Chromebox 4 can tear through demanding Linux apps with ease. I installed Firefox and Olive from Flathub without issues, and both programs ran smoothly. The Linux container uses graphic acceleration by default on the Chromebox 4, which makes graphical intensive Linux apps like Minecraft perform significantly better. As of OS 89, there’s still no mouse pointer lock in Linux apps — required to play first-person shooters and games — but you can switch an experimental flag that brings the functionality with chrome://flags/#enable-pointer-lock.

The Chromebox 4 comes with one of several 10th generation Intel CPUs. Asus configured our unit with a Core i3-10110U, which is fast for a traditional Windows laptop loaded with software (and OEM bloatware). While the CPU’s 15W TDP requires a fan, the fast performance makes up for the noise. The Chromebox 4 is noticeably more capable than the Celeron CPU on the CBx2: web apps and websites load quickly, I’m able to render multiple 1080p videos without performance hitches, and the 8GB RAM allows me to multitask with hundreds of Chrome tabs. If 8GB isn’t enough for you, Asus allows you to install extra memory to the Chromebox.

Here are a few benchmarks to give you an idea of the Chromebox 4’s performance:

Yes, if you need a powerful desktop PC that can get you online and don’t mind a few compromises. The Asus Chromebox 4 may be tiny, but its robust CPU and plentiful RAM can handle all my Chrome tabs, and it’s even able to render videos without breaking a sweat. The port selection is excellent, too. And for the price of $489, you’re getting a reliable computer that will last a long time.

There isn’t much to complain about the Chromebox 4, but I don’t love the CPU fan’s noise. Like the CBx2, you lose your only USB-C port if you use a USB-C to DisplayPort with the Chromebox. My biggest complaint is its value: a fully loaded Chromebox 4 will run you $899, and the i5 unit costs $649, which aren’t worth the extra horsepower on a Chrome OS machine. While the i3 and Celeron models make sense for most, a comparable Chromebook is a better buy: it’s portable, has a touch screen and webcam, and requires little effort to get set up for around the same price. I wish Asus bundled a keyboard and mouse with the unit to sweeten the deal. 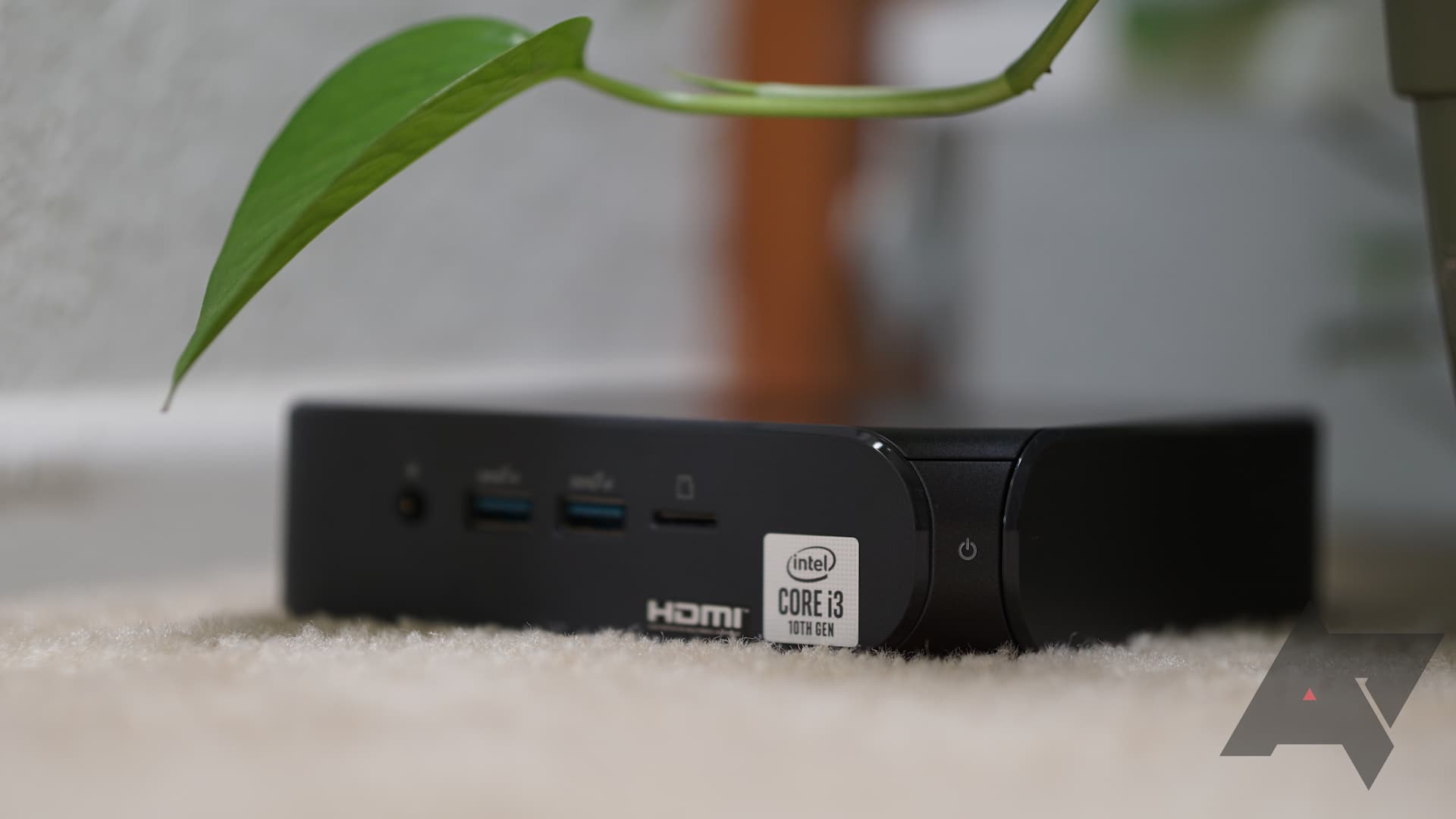 The Asus Chromebox directly competes with CTL’s similar CBx2, which only offers Celeron and i7 variants. While the performance gained with the Asus i3 model is significant, it’ll cost you around $200 more. If you require CPU-intensive Linux apps like GIMP, the Asus i3 is an easy decision. Despite its shortcomings, the Asus Chromebox i3 is still a very competitive PC for the right buyer.

The Asus Chromebox 4 is available at the following retailers:

Long-term review and i7 testing

The Asus Chromebox 4 has been my primary computing device for the last few months, and I’ve grown even fonder of it. The computer is fast, reliable, and secure, and it’s a PC I’ll continue to use for years to come.

Asus sent us a fully configured Chromebox 4 following our review, sporting an Intel i7 10th-generation CPU, 8GB of DDR4 memory, and 256GB M.2 NVMe SSD. It’s noticeably faster than the i3 Asus Chromebox, handling intensive desktop applications like Kdenlive with ease. The speed is definitely overkill for most but could appeal to the right buyer who wants to push Chrome OS to its limits. It’s a fantastic Chrome-powered computer, but $900 is too much for the average Chrome consumer. 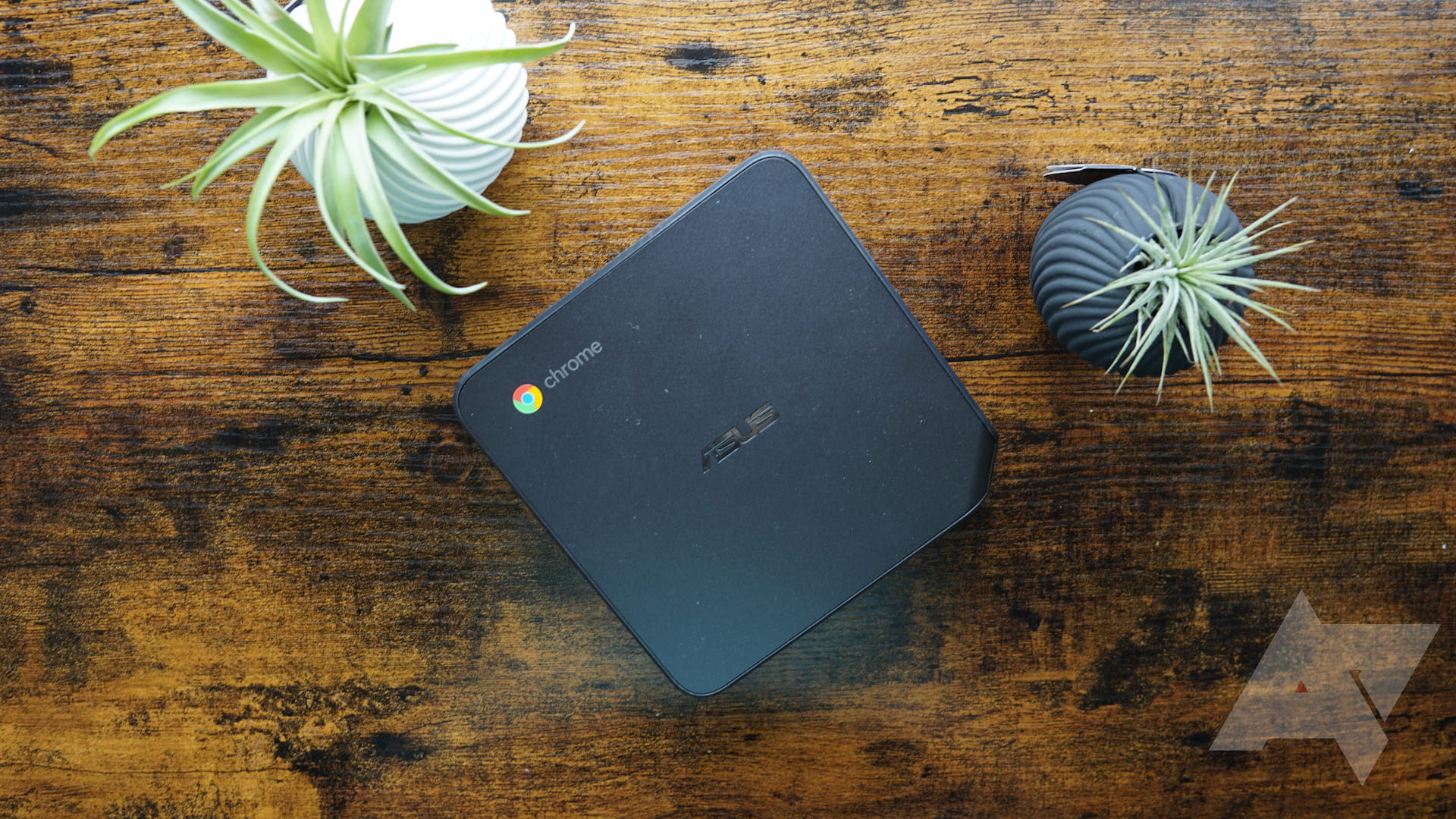 One underappreciated trait I’ve recently grown to love about the Asus Chromeboxes are their storage speeds. The M.2 SSDs blow the eMMCs found on most Chrome OS devices out of the water. Copying big files from one folder to another took just seconds, about four times faster than my Pixel Slate. The proverbial icing on the cake is the slew of ports available, allowing me to import files to my PCs at lightning speeds.

Despite Asus’s Chromebox 4 having a lot going for it, I still think that both models are too pricey. The i7 configuration is simply not worth its $900 price tag, which can buy a versatile gaming Windows laptop. If you can pick up the i3 at a discount for $400, you’ll be getting a fair deal — I just wish that was the asking price.