Back in January we heard tell of a new and interesting feature coming in Android 12: “app hibernation,” which would automatically place long-unused apps into optimized storage, thus freeing up storage on your phone. The feature hasn’t been spotted in any of the Android 12 developer preview builds thus far, but apparently it’s just around the corner. References to the feature have already been spotted in AOSP code, and now they’re showing up in leaked builds of Android 12.

The hibernation feature works in a similar fashion to apps getting their permissions revoked after long periods of non-use, but it’s much more direct. XDA managed to get it working on last week’s leaked build of Android 12, showing that a new “Unused apps” section of the App info settings menu will be added, replacing the “remove permissions if app isn’t used” toggle currently available in the App permissions screen. It looks like it’ll take three months (or thereabouts) for Android to flag an app as unused; the operator then has the option of automatically setting them to this state.

When declared unused, an app will have its permissions revoked for practical safety (as is the behavior in Android 11), notifications will be disabled, and temporary files (presumably cache and similar) will be deleted in order to free up space. Presumably these apps could be re-enabled extremely quickly, since otherwise there’d be no benefit versus simply uninstalling them. 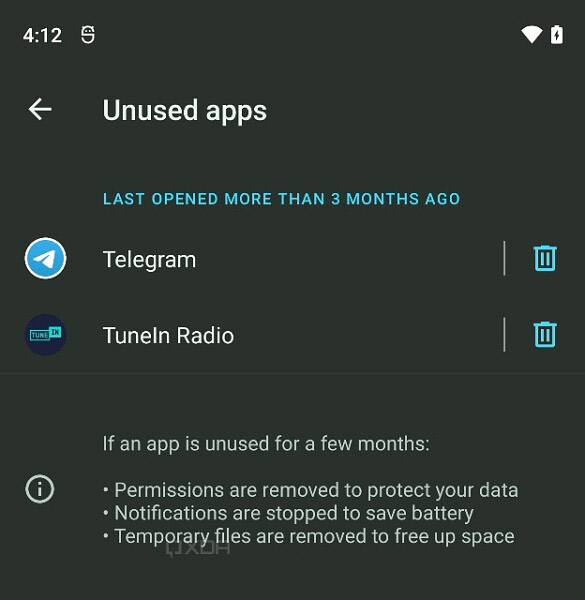 I could see this being a useful feature for that once-in-a-blue-moon tool, like the extremely infrequent Lyft rides I use during tech shows and about twice a year beyond that. Of course, it’ll be a major boon to anyone using a phone with a low amount of available storage space. But, as always with upcoming and unconfirmed Android features, there’s at least some chance that it won’t make it into the final release version of Android 12.