Android Auto has gone through quite a few revisions over the years, with many changes aimed at making the interface easier to use while people are driving. With the latest update, a new interface is in development that may promise to keep the navigation screen in view all the time so drivers never have to switch screens just to check notifications or control music.

First spotted by AndroidWorld in the Auto v6.9 apk, the new interface is codenamed “Coolwalk.” While there are a couple of changes involved, the main feature is a semi-transparent overlay that appears over the top of your navigation screen. Ideally, this allows you to keep live navigation on screen while also including glanceable windows for other information on the side. It appears to offer the same basic functionality as the recently launched split screen function, while making the necessary compromises for non-widescreen head units. 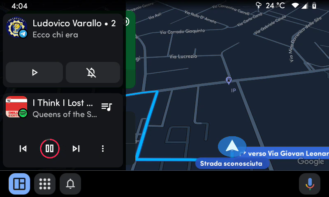 The overlay can contain up to two vertically stacked cards, including the audio player and a list of notifications like recent calls and messages. This does cover up navigation instructions, but at least allows the driver to see their route on the map, along with any street names and other landmarks.

To hide or display the overlay, users will find a new button at the far left of the navigation bar. Based on the current implementation, the button design is also moving away from the current circle background to instead use rounded squares. And if things are working as intended in the current iteration, having the overlay active will disable player controls in the navigation bar; but they may be accessible during fullscreen views. 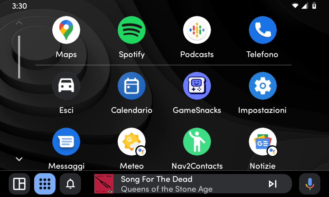 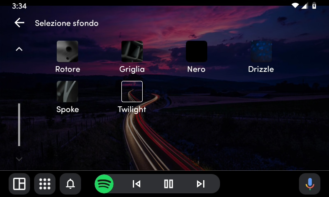 This implementation still has some bugs and plenty of unfinished or unpolished elements, so it surely won’t be rolling out to anybody in its current state. As detailed by AndroidWorld, some functions aren’t even operational, like the Next and Previous buttons in the audio player. Likewise, only the main overlay is partially transparent while the cards contained within are fully opaque, though it’s unclear if there’s any benefit to reducing their opacity.

Unrelated to the overlay, two other changes were spotted with this update. The first is a set of three new backgrounds for Android Auto. While this slightly expands on the limited set of options currently available, the interesting detail is that the wallpapers are not included natively with the app, but rather loaded from Google’s servers. This could indicate that Google will begin growing the selection remotely, without requiring app updates; but may also exist to cover edge scenarios, like removing a problematic wallpaper or updating them to support different screen sizes and aspect ratios. 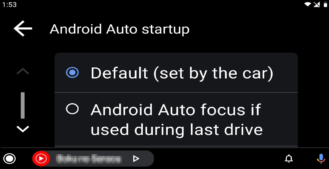 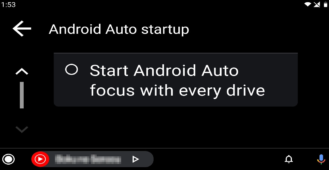 None of these features are live for the general public yet, so you’ll have to wait a little longer for any of these to roll out. While the overlay is certainly not ready for primetime, it’s possible the new backgrounds and the startup setting could go live at basically any time. As usual, we’ll be keeping an eye out for these features to arrive.