Asus has built a steady presence in the mobile industry with help from its recent ROG Phone series. But it’s been chasing a general audience (mostly in Asia) for much longer with its Zenfone lineup, attempting to please everyone and usually failing. Now, after a couple of devices with cameras that can flip from back to front, the Taiwanese brand is going small against a tide of big phones with the upcoming Zenfone 8.

Until now, Sony has been the only notable player taking up the compact flagship lane to limited success. Asus seems to think that even those phones have become unwieldy with extra-tall 21:9 displays. The Zenfone 8 is one of the smallest flagship-spec’d phones you can get, and it starts at just $599. Will the company find success with something so small that has it all? That’s up in the air, but it’s a damn good phone.

This phone, which comes with Qualcomm’s top-tier chipset for 2021, a vapor pipe cooling system, and a 4,000mAh battery, sizes up 3mm shorter and 1.5mm thinner than a Pixel 3a — a phone that very much does not have those things. Asus uses the latest Gorilla Glass Victus to protect the display and a pane of the older but still durable Gorilla Glass 3 for the back. The latter features sweeping curves to the left and right edges making it easy to pick up and cradle. The stack is held together by an aluminum mid-body. The top edge of the device has a 3.5mm headphone jack, the right side has a volume rocker plus a power button that allows for user-specified shortcuts, and the bottom has a USB-C port, notification LED, and a dual-SIM tray. There’s also a microphone to the right of the tray, so be sure to put your SIM key in the recess to the left. The Zenfone 8 is IP68 certified, too. 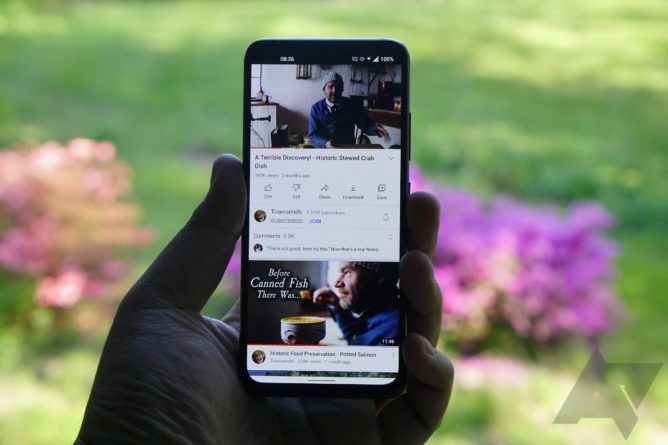 In a historical context, I wouldn’t have called this small, but when you see how many phones with a 6.5-inch or greater screen span are being sold these days at many price points, I’m not calling this thing big. The device boasts a 5.9-inch OLED display from Samsung with a 120Hz refresh rate, extra-wide color gamut, and great outdoor visibility. If screen-to-body ratios are still important in 2021, 90% is nothing to scoff at. It has definitely been a great YouTube partner for me.

We’re way past the days when HTC was the only OEM putting out phones with good speakers, but even with its physical limitations, the Zenfone 8 is able to bring both volume and nuance. Powerful individual amps fire up stereo speakers which pass audio through relatively lofty echo chambers. Add in a few software tricks like simulating bass overtones for meatier drums and some high-end smoothing and we’ve got textured sound coming out of a tiny boombox. In fact, with a loud enough pulse, you may even see some dust burst out of a grille. 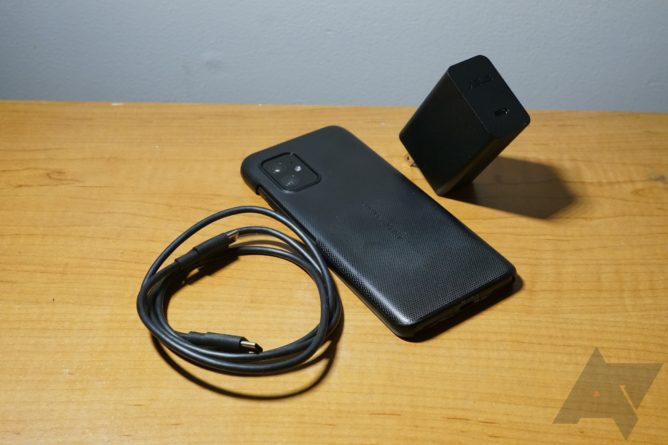 Besides the phone, you also get a bumper case and a 30W HyperCharge adapter with a Type-C to Type-C cable. No wireless charging here — one of several trade-offs when prioritizing size and cost.

ZenUI 8 brings heavy modifications to Android 11, though I appreciate that many of them are opt-in. Lighter touches I particularly like include the aesthetic customizations, dual app instances for different accounts, and a one-handed mode akin to iOS’s Reachability (which is expected to come to Android 12). Game Genie tools have been imported from the ROG Phone series, but not the entire Armoury Crate suite. Then we have the hardcore management stuff: several customizable power modes that control Wi-Fi band usage or when it sticks with 4G over 5G, and moddable charging parameters like capping maximum battery capacity below 100% for better longevity.

If you’ve seen our earlier reviews, you know that the Snapdragon 888 is a great workhorse and having as much as 16GB of RAM really helps. So, it’s not surprising to see that the Zenfone flies high. Even with the base 6GB configuration, you should do fine with the help of OptiFlex memory allocation which keeps your most used apps active and ready to be opened. As for the long-term picture, Asus tells me to expect “at least” two OS updates and security updates to match, though it didn’t specify frequency. Given how heavy the ZenUI package is, I wouldn’t be surprised if the firm ended up falling short as it has with past products. 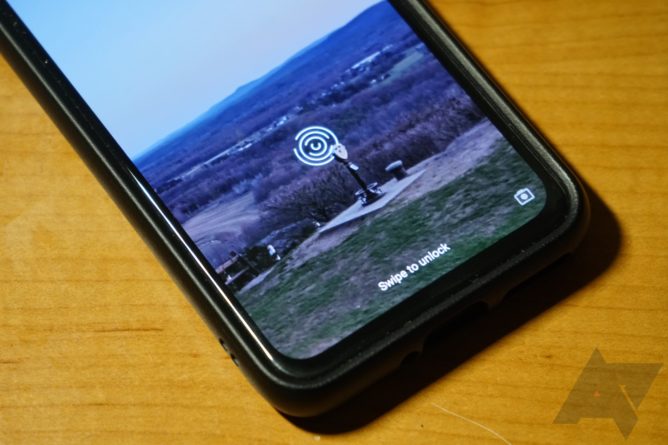 The in-display fingerprint sensor was a sore spot earlier on in my testing, but after wearing in some updated firmware, it now reads as fast as I expect it to and more reliably. Annoyingly, accidental activations in my pocket still happen even when I have the prohibitor toggle turned on.

On the 5G front, the phone supports four of the major sub-6GHz bands in the US: n2 (1900MHz), n5 (850MHz), n66 (1700/2100MHz), and n71 (600MHz). Notably, it does not include T-Mobile’s centerpiece n41 (2500MHz) band that’s supposed to provide the best of both throughput and coverage. When I asked why, the company explained that it is working with limited RF components because of its small scale in the phone industry and, thus, different regional SKUs share support for most 5G bands though the company did try to cover as much local spectrum for the variants. It still hurts to lose out on what’s supposedly the best that 5G has to offer in the US right now.

Battery life on a lighter-use day

With a ton of power management features, the Zenfone 8 does go far if you don’t pay mind to them. The most stress I put on any phone is my occasional 12-hour sojourns across New England. I consume a diet of streaming videos, podcasts, and music, frequently turn on location tracking for transit apps, and scroll my socials and work stuff at least three times an hour. My daily driver, a Pixel 3a, typically needs some help after 4 to 5 hours these days though I acknowledge age has a lot to do with it. By contrast, the Zenfone ends the day at around 25%, which is quite good. 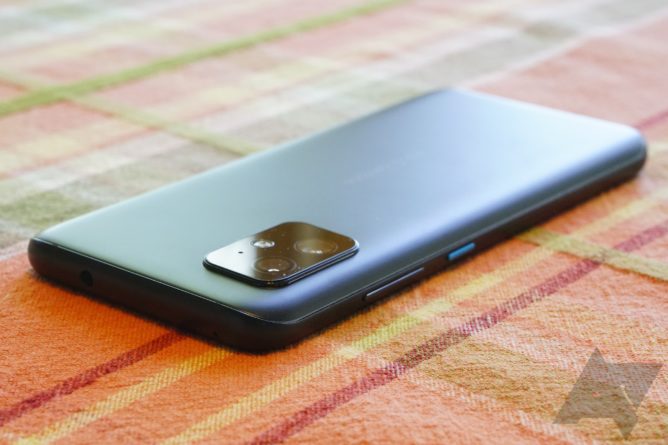 The rear cameras should be familiar to Zenfone 7 Pro owners: they’re the 64MP Sony IMX686 with optical image stabilization and the 12MP IMX363 for ultra-wide and macro shots. New for the Zenfone 8, though, is the 12MP IMX663 selfie cam with dual-phase detection autofocus — that ability is geared towards influencer types who point products right up to the lens.

The main sensor puts out serviceable photos. Colors are accurate for the most part, but tend to be undersaturated around the extremes of the dynamic range. The ultra-wide does a better job on that front, probably because it’s dealing with more information around the periphery which feeds better into its auto metering method. Still, there’s a middle ground when it comes to how devices post-process color and I think Asus undershot a bit here. HDR isn’t the best, either, with halos and fringing apparent in some pictures.

That said, Asus has stepped up for the mobile creatives with straightforward Pro modes for both stills and video that allow for things like RAW shooting, bracketing, custom presets, and audio focusing between the phone’s three mics. Video can be shot at up to 8K and 30fps with electronic image stabilization or 60fps in 4K with optical stabilization. Slow-motion video at up to 4K and 120fps is also available.

Yes. There is no denying that Asus has packed as much hardware as it could into a small and ergonomic box. Sure, some of the myriad software features are underbaked, overwhelming, or even bothersome sometimes — warnings about app power consumption are a prime example. Perhaps some of that cruft should be cut out, but it’s easily ignored or turned off. When you settle into the Zenfone 8, the end result is a fluid experience with plenty of utility and lots of lasting power to boot. 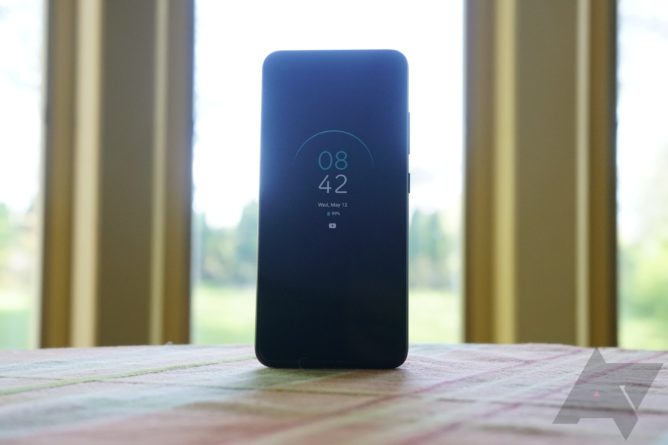 The base configuration of 6GB of RAM and 128GB of storage costs $599. From a US standpoint, I consider that to be a great deal when factoring in the entire package. Going after a Snapdragon 888 device, you’d be paying $130 more for a OnePlus 9 or $200 more for a Galaxy S21. The fact that you can upgrade that RAM to 16GB at $799 is pretty cool, too — Samsung and OnePlus make you pay four digits just for 12GB.

Personally, I’m just happy to have all this power in something I can easily use in one hand. 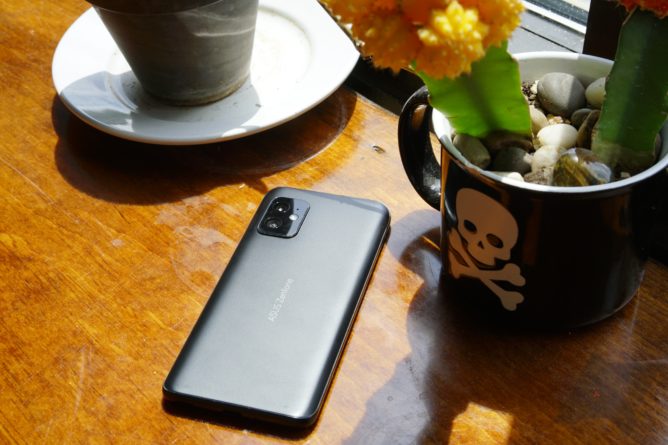 Since publishing the review, I’ve dropped my Zenfone 8 on asphalt and general sales have started in North America. Each of these developments belie some important points I want to make about this thing.

For the most part, the phone has kept up with me. Apps continue to open up fast, so much so that I don’t really notice. I’ve also gotten updates every couple of weeks, though I’m using a pre-release review unit which may be on a different track to what consumers will get. Still, the fact that Asus is running an Android 12 beta program for this device definitely takes commitment. On most days when I’m out and about, I end up with between 25% and 40% of battery life remaining. That performance varies a bit more during my longer traveling days, of course, but I did take an all-day journey from Hartford to Boston where I held out on topping off and was able to stretch out power saving mode to end the night at 1%.

I might’ve been a little overly critical in my analysis on the cameras, but I do like using them. Ironically, while I love using a small phone, I do have to mind where I grip it to avoid having my fingers intrude on wide-angle shots. Most importantly, I like what they put out. 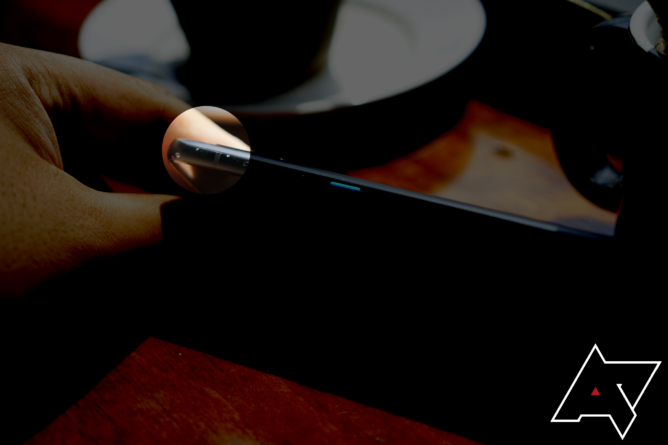 I don’t like doing “drop tests” because they tend to, uh, hinder rather than help my review process, and no two drops are exactly the same. I did once forget that I had placed the device on my lap before getting out of a car, and the consequence was a 3-foot plunge onto the street. Amazingly, neither pane of Gorilla Glass came away with even so much as a scratch. The aluminum framing took several dings but it was nothing spectacular. To reiterate, this is by no means scientific, but I’m pretty happy with the outcome here.

Asus has yet to go on the record following up on the exclusion of band n41 which has carried on to U.S. release units. I’m pretty certain the company admitted more in its initial explanation than it wanted to. We could also easily factor the global chip shortage into that situation as well as to why phones with only 8GB of RAM are on sale in North America today.

Still, the Zenfone 8 has proven its endurance time and again and I’m happy to say that this phone provides unparalleled value for hardcore Android users right now.