If you’re all-in on Amazon’s Alexa assistant platform, or you’re looking to start, we’ve got a hell of a deal for you. Today only Best Buy is selling a 55-inch Toshiba 4K TV, powered by Amazon’s Fire TV platform, for just $379.99. Not only is that $100 off, but they’ll throw in a freebie Echo Dot third-gen, a $40 value.

The Toshiba 55LF621U21 is a basic 4K model, lacking some of the bells and whistles of higher-end designs. But it does have HDR 10 support, 3 HDMI inputs, and a decent contrast ratio of 4000:1. A standard TV tuner, headphone jack, and optical audio ports are included, and the TV can connect directly to Bluetooth audio products without an adapter. And of course it’s packing Amazon’s Fire TV, so you can start using streaming apps as soon as you hop on Wi-Fi. (Or throw on an NVIDIA SHIELD, Chromecast, Roku, or Apple TV if Amazon isn’t your thing.) 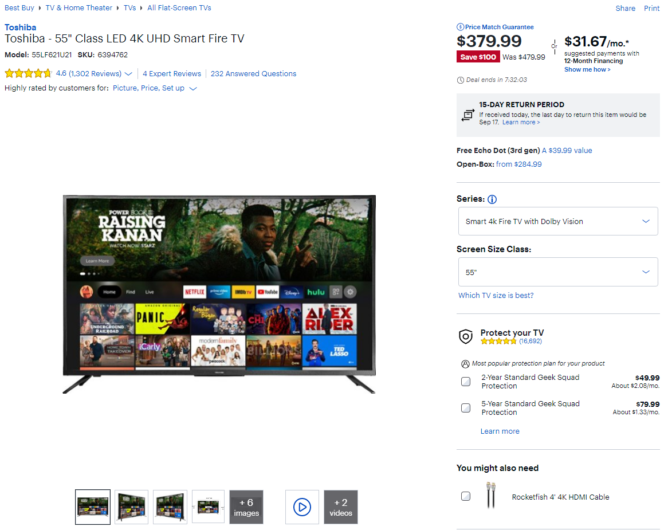 The 55-inch Toshiba and Echo Dot deal is the store’s deal of the day, ending at midnight Central time. But Best Buy is offering less dramatic discounts and free Echo Dots with eight other Toshiba and Insignia models, from 32 to 65 inches, with no expiration. You can check out the rest of those options here.