You can install apps from any source on Android, but most of us still turn to the Play Store to find new software. Google’s security policies help make it the safest, most straightforward way to use apps on your phone, but the reliance on algorithms to help issue automatic takedown notices can leave developers high and dry. After countless false removals, Google is finally testing a new help desk solution for devs to use with any questions and concerns.

According to an update shared on r/AndroidDev, the Google Play Developer Helpline is being piloted with select users in India through invitations. This new contact solution includes a fillable form for reaching out to a real team member instead of following through with an automated process. After submitting a form, developers will receive a callback on weekdays between 9 am and 6 pm IST. Google’s email lists several examples of what the helpline is to be used for, including policy enforcement and appeals. 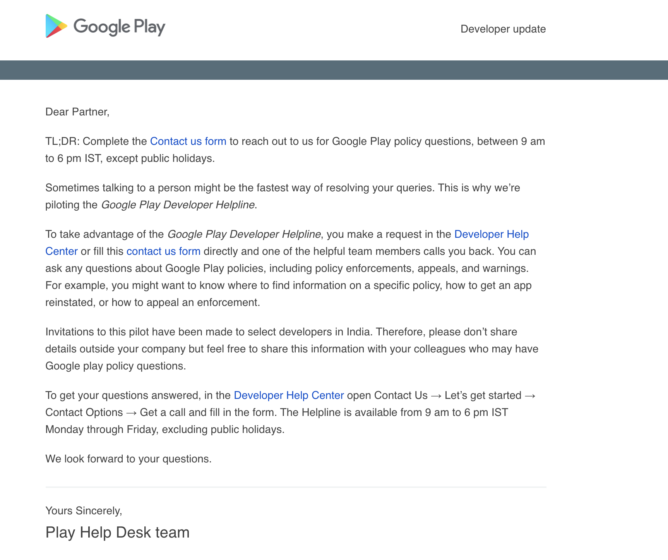 A solution like this has been a long time coming. The last couple of years have seen plenty of wrongful high-profile takedowns and removals of apps. From a video player shut down for featuring “.ass” as a file type in its description, to Podcast Addict getting kicked off the Play Store for hosting podcasts about the pandemic, there’s been a lot of collateral damage from Google’s act-first-think-later policies. And, of course, those are only the ones that grow large enough publicly for the Android community to learn about — think of the countless stories that never gain publicity.

Scaling up this sort of support team globally will be a challenge for Google — it’s probably why this hasn’t existed until now. With any luck, it won’t be long until this level of customer service is available to developers around the world.