It looks like Google is getting more aggressive about advertising experiments and tests it’s running in Chrome. The company has shared what it’s working on and how you can activate some of the experiments in the current Chrome Beta, version 94. None of the tests are exactly new, but Google publicly advertising them certainly is.

Google already teased some changes for the new tab page back at its I/O developer conference in May, and we’ve first spotted them in action in June. While the company still isn’t ready to roll out the changes to everyone, it’s now actively asking beta users to try them out for themselves. To do so, you can enable a collection of flags under chrome:flags, which give you the ability to pick your browsing session up where you left with Google Drive suggestions, shopping carts, and recipes: 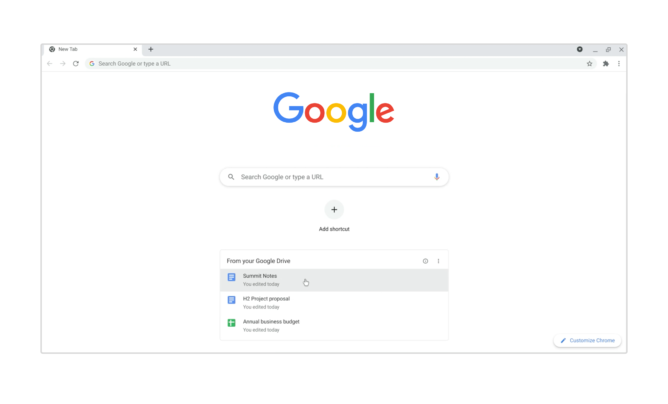 Note that these new tab page features are currently limited to the desktop version of Chrome.

Google has also highlighted a radical new interface for search on Chrome for Android. As we spotted in July, the company added a vertically scrolling carousel with Google search results below the address bar where you can switch to another result without needing to use the back button/gesture. You can activate this experiment by enabling the Continuous Search Navigation flag (chrome://flags/#continuous-search).

Last in line, the company would like you to test its new quote sharing option for highlighted text in Chrome for Android, which we first spotted in June. The experiment allows you to create a stylized quote card image from text you’ve highlighted, and it sure reminds us of Instagram’s text-based stories. You can try this for yourself by activating the WebNotes Stylize flag (chrome://flags/#webnotes-stylize). The option to send or save a text highlight will then show up in Chrome’s custom share menu.

As you might be able to tell, none of these experiments are new. Google openly advertising these tests and experiments is significant, though. The company previously hasn’t done much to bring Chrome flags to the public’s attention, mostly leaving them as options for developers and enthusiasts to play with. Instead, Chrome usually relies on server-side a/b tests to see how the public responds to new features and interface changes, with no immediately visible option to turn things on and off manually. Giving consumers the information needed to participate in tests themselves is a small shift away from that strategy. And Google recently adding a Chrome Labs section next to the address bar with direct access to active experiments fits that picture perfectly. Personally, I really wouldn’t mind Google expanding this strategy to other apps and services, as server-side changes often take frustratingly long to arrive for everyone.

All of the experiments mentioned are available in the current Chrome Beta (v94), which you can download for your desktop or for your phone on the Play Store or over at APK Mirror.