Google loves to demonstrate its ability to create fun toys, particularly with the use of augmented reality. We’ve seen plenty of AR demonstrations in the past with animals and other common objects, and there have even been some trademark collaborations to play with, but now Google is diving into the world of anime with an assortment of iconic Japanese characters like PAC-MAN and Gundam.

Google partnered up with some popular franchises like PAC-MAN, Hello Kitty, Ultraman, and Gundam to offer 14 characters that you can place in the real world through AR. As usual, they’re animated models that can be positioned as you like on just about any practical surface.

The new stash of AR characters can be accessed the same way you would reach out for previous models. Simply open the Google app or search bar on your phone (requires Android 7+ or iOS 11+), type the name of the character you want to activate, and look for a button titled “View in 3D.” After that, just tap the “View in your space” button and follow the instructions to move your phone around until it can place the character. If it doesn’t appear where you expect it — and it never even gets close for me — you can use pinch gestures to resize the model and a drag gesture to place it in a new spot.

A couple of these (i.e. Cogimyun and Gomorra) seem to only be available if you search by their names in Japanese, but the rest should work with their English versions. Searching for PAC-MAN also seems to be finicky, so you might need to try using all capital letters, and make sure you have the hyphen; but you will be rewarded with the one character that includes sound effects. 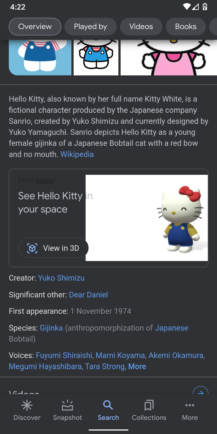 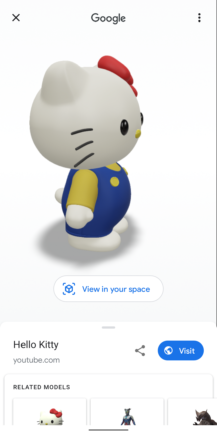 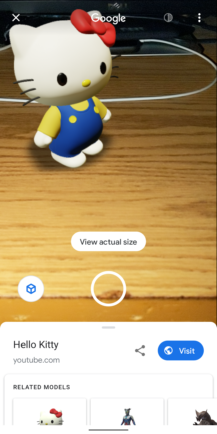 Open up a few and show them to your kids, your friends, or anybody else that hasn’t seen AR yet. If you really like what you see, hit the shutter button to snap a picture to keep around.