The Pixel 4 had a few issues at launch, but one of the most common complaints was its high price. A year and a half later, there are now consistent deals on the phone, making it worthy of consideration if you’re looking for a high-end Google handset. Woot has one such deal for US buyers today: a new, unlocked model starting at just $399, a full $400 off the original retail price.

Buyers can choose between the base 64GB model or the boosted 128GB version for a very reasonable $30 extra. The former is available in both black and the “Oh So Orange” color that was hard to find at launch, while the latter comes in orange only at the time of writing. These are brand new, factory unlocked phones, not refurbished or returned, and should work with any American carrier. 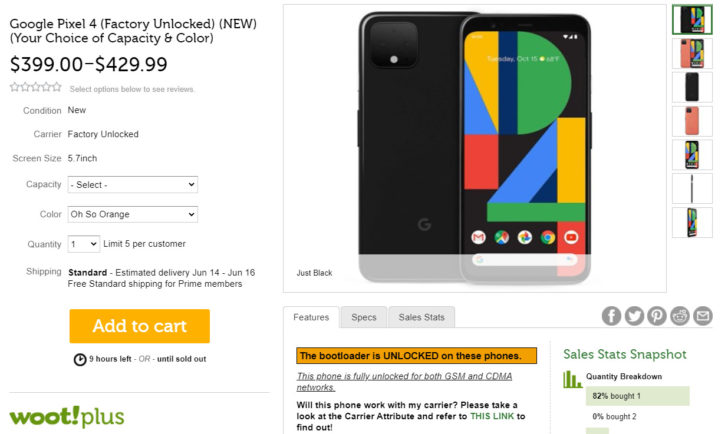 While the Pixel 4a and the 5 have proven much more popular thanks to lower relative prices and better battery life, the Pixel 4 and 4 XL still have their fans who prefer the more premium glass back and more powerful Snapdragon 855 processor. This deal still saves you $300 off the price of a new Pixel 5, giving up only a little extra RAM, the 5G radio, and better battery life, and swapping the fingerprint sensor for face unlock — a pretty good trade if you want that raw power. The Pixel 4 in this deal is only $50 more expensive than the base price of the decidedly mid-range Pixel 4a.

As is often the case on the Amazon subsidiary Woot, this deal is available for today only, and expires at midnight Central US time. Shipping on all Woot items is quite cheap, but if you happen to subscribe to Amazon Prime, you can get it for free. Unfortunately the larger Pixel  4 XL isn’t on sale today. We’re starting to see this price more often, so if you’re particularly interested in a deal, you might just want to hold out for a little while longer.