Tablets have evolved into some great productivity machines, especially if you’re looking to escape from the distractions of a full-fledged laptop. It can be tough to find Android tablets worthy of buying over Apple’s iPad lineup, but Samsung’s Galaxy Tabs are well worth the cash. If you’ve been hoping to snag a Tab S7 on sale, today’s you’re lucky day.

The Galaxy Tab S7 isn’t Samsung’s highest-end tablet — that honor belongs to the Tab S7+ — but for the price, it’s tough to beat. You don’t get the vivid OLED display of its big brother, but its 11″ 120Hz display is still sharp and colorful. Otherwise, it’s pretty much identical to the ‘plus’ version, including the same Snapdragon 865+ SoC for plenty of power. With 128GB of storage and 6GB of RAM, this tablet should handle anything you throw at it. Meanwhile, the bundled S-Pen makes it a dream for productivity. 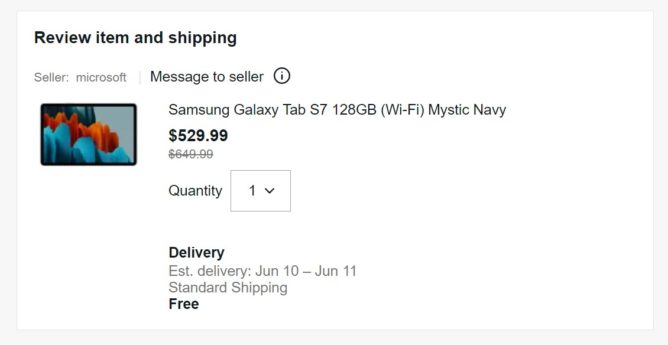 You can grab a Tab S7 in “Mystic Navy” through Microsoft’s official eBay Store for just $530, well below its usual $649 price. It’s not the lowest we’ve seen on this particular model, but it’s pretty damn close. Grab yours using the link below.