Active noise cancellation is all the rage in the headphone space, putting a premium on the ability to tune out the world and focus on whatever it is you’re listening to. But what if you’d rather do the opposite? What if what’s happening around you is actually pretty important, like the sound of your kids trying to beat their record for consecutive days without household destruction, or the rolling-coal diesel that’s about to turn you and your bike into a greasy smear in its blind spot?

The answer is bone conduction headphones. These gadgets rest outside of your ear canal — outside of your ear entirely, for most designs — and vibrate the bones in your head directly to get the sound to your auditory nerve. The upshot: you get to listen to your music (or video, or podcast, what have you) while still being able to listen to the world around you.

Listening to bone conduction headphones is a unique experience, one that’s both better and worse than conventional earbuds or around-the-ear headphones. In terms of audio fidelity, well, it kinda sucks. There’s no way around that: modern audio just isn’t designed with this kind of system in mind. A lot of these designs include foam earplugs, allegedly improving the sound… but that pretty much defeats the entire purpose. So audiophiles can pretty much disregard this post; I’m not one, and I’m usually listening to audiobooks, podcasts, background videos, etc. 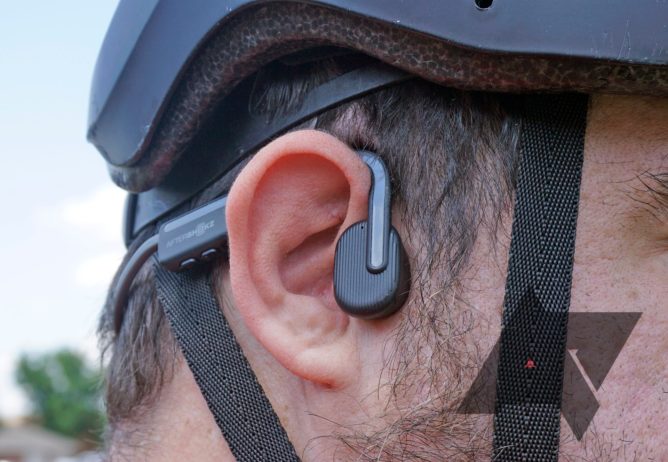 So what’s the point? The point is that you can hear all the stuff around you and whatever you’re pumping through your headphones, with more or less equal fidelity. It’s hard to describe just how big a deal that is to someone who hasn’t tried it before. But let me just list out the reasons that I’ve come to use bone conduction headphones most of the time:

Safety: Ask my buddy and former Android Police editor Cam: bone conduction headphones are really the only safe way to listen to something while riding on a bike, short of strapping a massive speaker to your handlebars. Keeping your ears clear for traffic and other hazards is a must. Joggers and dog walkers could also make good use of these headphones.

Situational awareness: You might be familiar with some headphones’ pass-through audio mode, which uses microphones to digitally allow external sound in along with whatever it is you’re listening to. It’s like the reverse of active noise cancellation. I’ve never tried any headphones with pass-through audio that worked even a tiny bit as well as bone conduction headphones. I’m a bit of a clumsy oaf, so I’ve started wearing them when grocery shopping, just so I can listen to podcasts without stopping and having people slam into my ass with their previously-silent carts. Bonus: I don’t have to take them out when going through the checkout.

Comfort: North Texas is so humid that you’re basically wading through the air for five months out of the year. In such conditions, there’s no kind of headphones that don’t get sweaty and nasty in your ears. Enter bone conduction headphones, which aren’t in your ears. Combined with their handiness for workouts, these designs are fantastic for keeping cool and comfy when it’s soupy.

There are a few downsides. In addition to the previously-mentioned drop in audio fidelity, bone conduction headphones also let more noise out via their strong vibrations. So they may not be the best choice If you’re in close quarters with other people and you don’t want to annoy them, as in public transit. They’re also not ideal if the sounds around you are so loud that you really should be using hearing protection: obviously, they offer none. 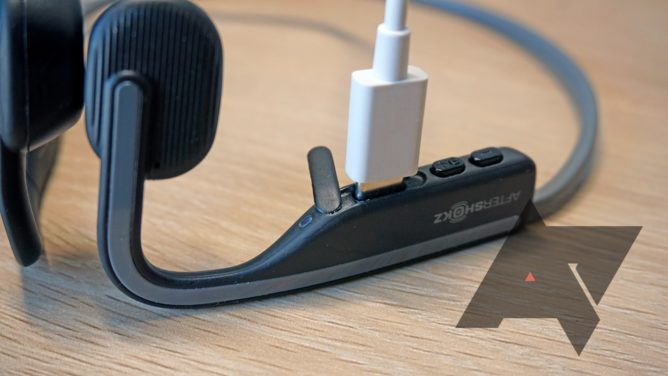 The AfterShokz OpenMove’s easy USB-C charging is one of my favorite features.

There are a small number of vendors offering bone conduction headphones, but Aftershokz has really cornered the market. I’ve used three different generations of their headphones, with the latest being the relatively cheap OpenMove. They do everything I need them to, with USB-C charging, basic “sweatproof” water resistance, and the ability to pair to two devices at once. At $80, I think they’re the best choice for most users.

The more deluxe Aeropex are for serious athletes, with a slightly lighter, tougher build, full IP67 water resistance, and extra battery life. The downside is a proprietary magnetic charging cable to avoid a less water-resistant USB port. It’s twice the price, not really worth it for my purposes. For swimmers, Aftershokz offers the Xtrainers, a standalone, non-Bluetooth set that can hold 4GB of music without the need for a hosting device.

I’d recommend starting with the OpenMove: give them a shot for a week or two, while your shop of choice will still accept returns. (There are cheaper alternatives, though I can’t speak to their quality.)  They’re not for everyone, but I think a lot of people will absolutely fall in love with bone conduction headphones when they give them a try.