A lot of virtual ink has been spilled about Google’s upcoming flagship line-up. From leaks to quasi-announcements to teasers, we’ve nearly seen everything the Pixel 6 and 6 Pro will offer, and through it all, one conviction has remained immutable in my head: I want that telephoto lens and I want it on a Pixel camera.

I love taking photos with phones. I’ve been doing it since the Nokia N95 in 2007 and I believe I’ve developed a certain flair for it. I’ve long ago acknowledged that there’s no way I’m getting a DSLR-quality result from my phone, but I’ve also recognized that I’m benefitting from many other perks like better post-processing and a camera that’s always with me. This gave me the freedom to explore the limits of what that camera can and can’t do.

Over the years, I’ve improved my composition, subject choices, hand steadiness, and gotten a better eye for detail, while my phones have evolved along with me, offering higher resolutions, more natural HDR, better and more lenses, better post-processing, and a slew of options I can switch between on the fly. My latest weapon of choice is the Pixel 5 and, although I can get pretty awesome results out of it, I feel like the lack of a telephoto lens is holding me back.

It’s all about that rectangular-ish sensor in the middle.

To me, this sensor would be another tool in my composition belt, to be added to the regular, portrait, and wide-angle shot. I’d love to be able to get more detail out of a further subject without having to physically step toward it, or to better frame it without having to crop the original image. It’s an option I sorely miss anytime I’m out with my Pixel 5 and going to zoos or expos or attending events where I have no control over the minimal distance between me and my subject.

I’ve been waiting for Google to bring a telephoto to its line-up ever since this kind of sensor became mainstream on Samsung, Huawei, and other brands’ phones. I’ve checked those impressive zoom samples posted on Twitter and in reviews, and I know what a tele lens is capable of. But Google using it would be another story altogether: coupled with its magical Super Res Zoom, it should provide more stabilization and potentially more digital zooming capabilities than the indicated 4x optical zoom would let us believe. 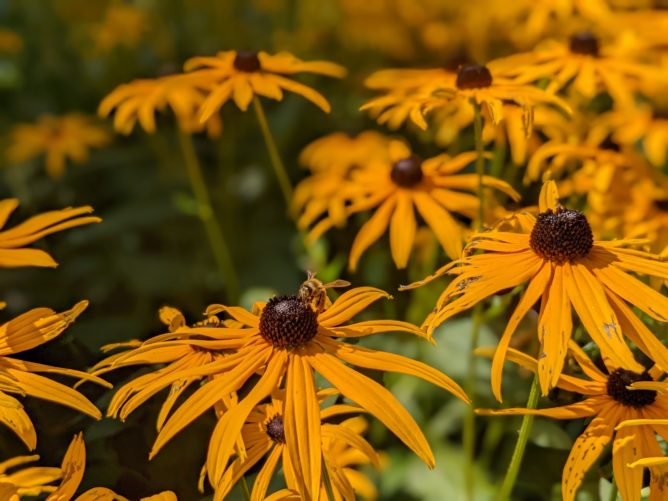 Let me get closer to that bee without risking getting stung.

We also know Google will be using the tele lens to un-blur people’s faces in photos and probably perform some other witchcraft we haven’t heard about yet. Or thought about. Look, I never knew I wanted an astrophotography mode on my phone until Google introduced it, and I’m sure its camera wizards have more cool ideas to introduce us to.

That’s why the Pixel 6 Pro is extremely intriguing to me. Sure, I want to see what that Tensor SoC is capable of achieving, and how much I’ll miss the handy pocketable size of the Pixel 5, but the real curiosity is that new sensor. It’s not even a question of whether or not I will buy the phone, nor is it a question of color — it’s only available in black in France — but it’s all about what I can do with it once I have it, how much I’ll learn and improve thanks to it, and how far I can push it to get even more interesting shots.