JBL launched a bunch of products at CES this year, but few looked to be as promising as the Charge 5. Part rugged Bluetooth speaker, part power bank, the newest entry in the Charge series has much to offer, but it’s a lot more spendy than your average Bluetooth speaker. While long-time JBL fans may be disappointed the new PartyBoost pairing feature has such narrow compatibility, everyone else will be too impressed by the class-leading audio and killer battery life to care.

Each new entry in the Charge series has kept the same basic design with minor revisions, going all the way back to JBL’s first-gen speaker in 2013. The Charge 5 is nearly unchanged from the previous model, keeping the same fabric-covered body with plastic end caps. The button selection runs along the top, with controls for power, volume up and down, play/pause, pairing, and a PartyBoost sync button. There’s a battery indicator on the front, gradually decreasing in brightness as the speaker runs out of juice. On the back, you’ll find a USB-C port for charging the speaker and a covered USB-A port for the power bank. Sadly, there’s no 3.5mm jack.

There are plenty of speakers available today that offer a more attractive design — the Sonos Roam, for example, takes this basic vibe and cleans it up. You’d be hard-pressed to find a speaker that feels this solid in your hand, though. It feels almost like you’re holding a football, thanks to the rubber feet along the bottom. I have no doubt that this device could be tossed on the back of a bicycle, carried inside a kayak, or left sitting next to a pool and come out the other side no worse for wear thanks to the durable, water-resistant design. If you’re looking to hit the trail this summer to enjoy some time outdoors and you can deal with the heft, this is a speaker that should survive unscathed.

Although the Charge 5 looks like a 360-degree speaker, it’s actually front-firing, with its 20mm tweeter positioned directly behind the JBL logo. The side-mounted radiators do an excellent job filling out the soundscape with lows from the internal sub, but you will notice the directionality of the Charge 5 as you move around. That’s not necessarily a drawback, but it’s essential to keep in mind if you’re using the speaker to entertain. Keep the speaker on the sidelines, not in the middle of the party. 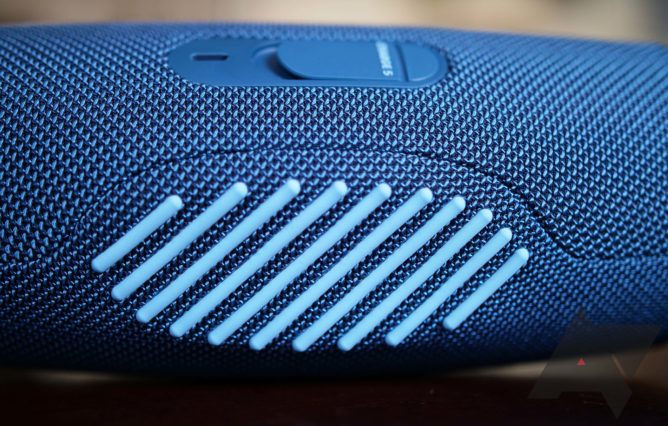 There’s not much else in the box outside of the speaker itself and a USB-C cable for charging. You’ll need to supply your own USB power brick for the Charge 5 since it’s not included.

Ruggedness aside, this speaker sounds great. For such a small footprint, its sound output is genuinely astounding. I could hear my Spotify mixes throughout my entire apartment while doing some deep spring cleaning just by throwing it on top of the fridge in my kitchen. Bass was loud and present without drowning out any of the highs and mids, and it handled every genre I threw at it with ease (podcasts included). The Bluetooth speakers around my home are admittedly pretty old, but I don’t remember the last time I heard such clarity from a wireless connection.

You will be genuinely surprised by how loud this speaker can get. I rarely needed to push past the 50 percent mark, and the speaker managed to go up to around 70 or 80 percent of its max limit before it began to lose detail. And even at quieter settings, those radiators still produce a noticeable amount of bass. 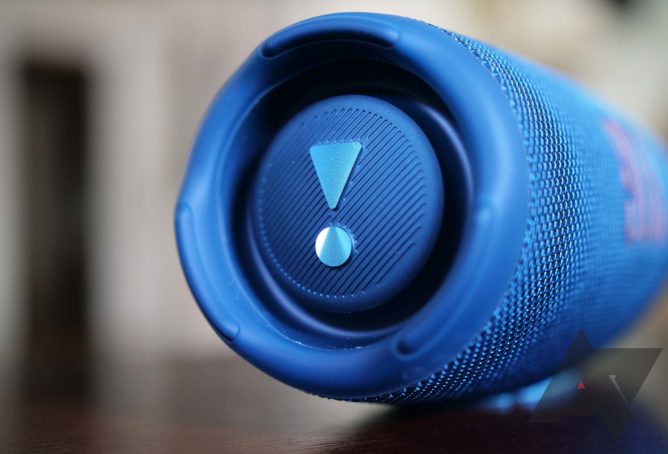 Unfortunately, if the default sound settings don’t match what you want for your music, there’s not much you can do. While JBL does offer an app for its audio gear, it’s limited to controlling PartyBoost and updating firmware — no EQ settings to be found.

Although the range on the Charge 5 is pretty solid, I did have a couple of connection issues while playing music from Spotify. A quick restart seemed to iron out the problems, but anything that gets in the way of jamming out at a party is certainly something to note.

JBL is promoting PartyBoost stereo pairing pretty heavily here — it even has its own button on the speaker. Although, I’d be more excited if this weren’t the third iteration of this feature. PartyBoost replaces JBL Connect+, which replaced JBL Connect, and these various wireless modes aren’t compatible with each other. If you’re the owner of a Charge 4 hoping to pair it with a new Charge 5, you’re out of luck. JBL’s lack of commitment to keeping these standards inoperable makes me worry that this won’t be the last time they change it. Considering the Charge 4 has been kept around at a lower price, it’s disappointing that these speakers can’t communicate with each other. 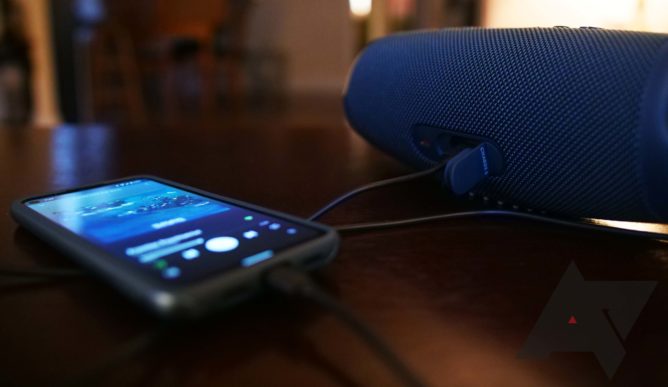 This speaker can also serve as a power bank for staying charged up on the go. It’s nice to have, but you’ll need to use the covered 5V USB-A port since the included USB-C port only powers the speaker. There’s no quick charging support, so you should look for a dedicated battery if you want more than an occasional non-urgent top-up. The good news is that the massive battery holds up well in regular use. The Charge 5 lasts about two weeks on a charge for me with daily use, though this will fluctuate depending on its loudness and whether you’re using it to power devices.

Yes, if you don’t mind spending big on a Bluetooth speaker. It’s a bummer that JBL has decided to reinvent PartyBoost for a third time, which makes you wonder if yet another incompatible revision is coming with the eventual Charge 6. However, the PartyBoost fiasco is only a problem if you plan to pair multiple JBL speakers for stereo sound. If you can put PartyBoost aside, this is a fantastic speaker. From camping to pool parties and everything in between, the Charge 5 has you covered.

The built-in power bank is a great way to stay charged up while you’re away from outlets, but the real highlight is just how much sound this rugged gadget is capable of producing. As long as you aren’t looking for skull-vibrating bass, JBL’s Charge 5 is a winner… provided you can stomach the $180 price tag. If it were a little cheaper, the Charge 5 would be a shoo-in for our Most Wanted award, so keep an eye out for sales.

I’ve used JBL’s newest portable speaker near-daily since I hit publish on this review a month ago, and it’s continued to impress me with its stamina and sound quality. I only ran low enough on juice once to qualify for a full recharge, though I did top up a couple of times before bringing the speaker to events like my first post-vaccine cookout. Anyone who wanted to DJ could quickly sync up their phone, making for one hell of a block party. Despite its overall size, it was easy to throw in a backpack for the day — though its weight keeps it from becoming something I’d want to carry all day.

It was also the perfect performer for jamming out around my apartment. On one particular day, my roommate was astounded to learn that I was streaming to the Charge 5 and not the large bookshelf speakers we have hooked up to our TV. For such a tiny package, it delivers a surprisingly robust sound. 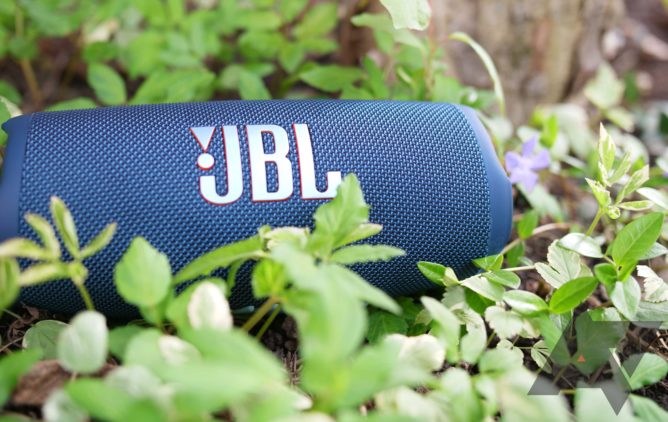 However, I still find JBL’s fragmentation of its stereo sync feature frustrating. The guy hosting that cookout I went to a couple of weeks ago had an older JBL speaker of his own, but because it used either JBL Connect or Connect+ and not PartyBoost, they were incompatible with each other.

I also found a new annoyance with the Charge 5 I hadn’t expected: it’s really picky about what cable you’re using to charge. I tried to use the USB-C charger bundled with the Nintendo Switch to power it up, but the battery indicator flashed on and off instead of delivering power to the unit. Once I switched back to the cable included in the box, everything worked fine. Still, it was frustrating to search my house for where I had placed the correct cable.

Overall, I’m quite pleased with JBL’s latest portable speaker. I still think it’s priced just a little too high, and PartyBoost has only continued to confuse me since venturing back out into society. Even at full price, I don’t think anyone will be disappointed in the Charge 5.