Lenovo has officially announced its newest gaming phone, the Legion Phone Duel 2. A leak from earlier this week already revealed precisely what this strange device looks like, and now that we have all of the details, things are even stranger than expected. Lenovo is boasting twin-fan internal cooling, which explains the bizarre placement of the camera bump. Another oddity is the return of the landscape pop-up camera. Of course, since this is a gaming device, it will offer touch-sensitive triggers for easy button mapping and high framerate support. Availability for the Legion Phone Duel 2 starts this month in China, and the device is coming to select markets in Europe and Asia-Pacific in May. Sadly there’s no word if the Legion Phone Duel 2 will be coming to the US. 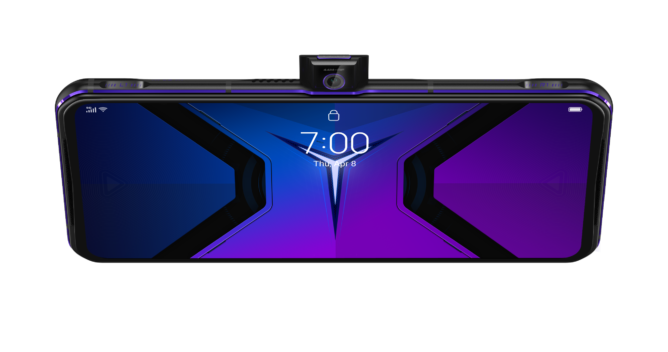 There’s no doubt the Legion Phone Duel 2 stands out. The center camera bump on the back with an exposed fan vent looks pretty odd (especially now that we know this is holding twin internal fans), and the landscape pop-up camera is also pretty strange. However, the original Legion Phone also offered something similar, so I suppose the side camera is now a defining feature for the Legion line. This camera clocks in at 44MP, more than twice as much as last year’s model. Clearly, the camera is placed on the side so that streamers can play their games in landscape with the camera centered on them as they stream, so Lenovo appears to be courting the YouTube and Twitch streaming crowd with this device.

Of course, all of the standard gaming phone options are also available, such as a large 6.92″ 144Hz screen, touch-sensitive programmable triggers, a large 5,500mAh battery that’s actually split up into two packs at each end of the device (a returning feature from last year’s model that’s designed this way to keep the internals cooler), and dual front-facing speakers. Headphones will have to connect over USB (since there is no headphone jack), and there’s a built-in gaming-centric app to adjust the phone’s settings for all of your gaming needs.

Sadly we don’t know if the Legion Phone Duel 2 will be coming stateside, though it will be available in select markets within Europe and Asia-Pacific. The 12GB model that packs 256GB of storage will retail for €799.00, and the 16GB model sporting 512GB of storage will retail for €999.00. Both devices will go on sale in May. While there’s currently no word what the 18GB model will cost, it surely won’t be cheap.