The last few Firefox releases haven’t been too exciting, but Firefox 93 has at least one neat new feature in tow that might help you cut down on the amount of apps you have installed on your phone. The latest beta can serve as an autofill service for logins and passwords, much like Mozilla’s own Lockwise app (or any other password manager, for that matter).

To activate the system-wide autofill option, head to the Firefox settings and enter the Logins and passwords section. In there, you’ll find a new option called Autofill in other apps. The entry will forward you to the Android system settings, where you need to confirm that you really want to give Firefox the ability to autofill in other apps. Once that’s done, Firefox will offer to autofill passwords and usernames for you. 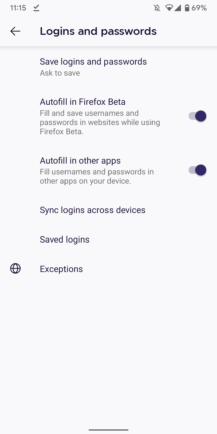 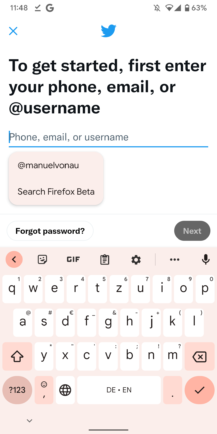 Despite being brand-new, the autofill implementation doesn’t work with Android 11’s keyboard-based interface. Instead, there’s the familiar old dropdown below the password or email entry field that first prompts you to unlock Firefox with biometrics and then gives you a rudimentary search interface letting you pick the credentials for the service you want to log in to, if Firefox doesn’t automatically recognize which is correct. The whole autofill experience isn’t as pretty as what you get with Firefox Lockwise, but it’s functionally the same.

Firefox Mobile doesn’t allow you to create new credentials inside the app at the moment, though. You’ll have to rely on Firefox Lockwise or the desktop browser instead and sync passwords via your Firefox account. Given that this is the first implementation of system-wide autofill for Firefox, we would hope that that will soon be subject to change.

Other than that, we haven’t spotted any breath-taking new features, but the developers might have changed additional stuff behind the scenes, which they usually announce once the official stable release rolls around.

If you want to give the beta a try, you can download it from the Play Store or over at APK Mirror.