Xiaomi’s phones have long been known for their exceptional value proposition. You can always find the latest specs and features in a Xiaomi flagship phone, and it won’t cost you an arm and a leg. It’s something you don’t often see these days when $1,000 has become the standard price for high-end hardware. That’s not how Xiaomi rolls, though. With the Mi 11, Xiaomi has one of the best flagship phones on the market, offering killer specs and a great value, unless you happen to be in the US.

The Xiaomi Mi 11 construction is typical of a Xiaomi phone. It has a bezeless design with a hole punch in the top left corner. The Mi 11 has a curved screen, but instead of the classic left-right edge curve, they went for a quad curve. This puts a slight curve to the glass at the top and bottom of the screen, as well as the sides. At the corners, Xiaomi does curve the metal up to help protect the display, so I don’t think it will be more fragile than most phones. I find this quad curve to be a bit nicer for swiping up for home and down for notifications, so I’m willing to take the risk.

The display on the Mi 11 is a 6.81-inch 1440p 120hz AMOLED display with 10-bit color. The 10-bit display means it can output 1.07-billion colors compared to the 16.7-million colors of an 8-bit display. The 1500 nit peak brightness put it on par with the S21 Ultra, making it one of the brightest displays on the market. The Mi 11 also has a 480hz touch sampling rate. This should make everything, especially games, feel more responsive. I honestly couldn’t tell the difference between the 480hz on the Mi 11 and the 240hz on phones like the S21 Ultra, OnePlus 8 Pro, or OPPO Find X3 Pro.

The build quality on the device is pretty good. The chassis is fully glass and aluminum—no plastic frame like the OnePlus 9. The Mi 11 feels about as premium as most flagship phones, but still not as solid as something like the Galaxy S21 Ultra or iPhone 12 Pro.

The Mi 11 has an optical in-display fingerprint scanner which is very fast and works as a heart rate monitor as well. Using the Xiaomi Health app, you can hold your finger on the fingerprint scanner for about 15 seconds and it will log your heart rate. It’s accurate, too, at about ±3 bpm off my Apple Watch. 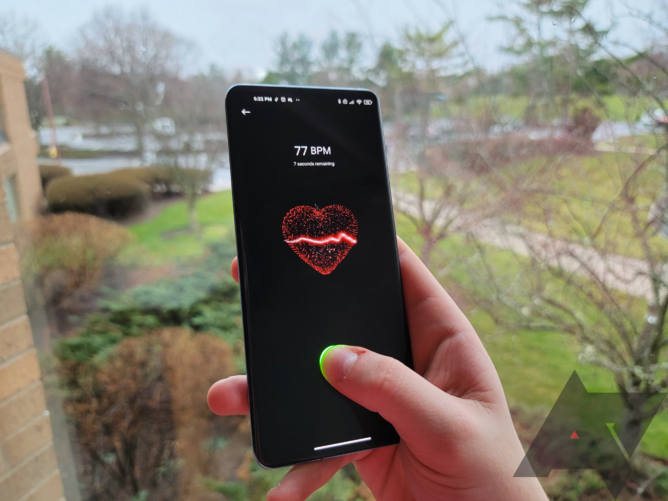 I absolutely adore what Xiaomi did with the haptics. The haptic motor is one of the best I’ve ever felt, which I’d say is almost as good as Apple’s Taptic Engine. There’s an effective tactile feedback littered throughout the UI. When you’re scrolling and hit the top or bottom of the page, it’ll give a gentle buzz to let you know you’re there. When using the fingerprint scanner, it vibrates while you’re holding it and finally gives out a nice burst right when it unlocks. When moving icons on the Home Screen or removing them, the haptics almost perfectly match the UI and animations. It’s such a small feature but makes the phone so much more enjoyable to use.

The global model of the Mi 11 has a 55W charger in the box, which is something Apple and Samsung can’t say. Along with that, it has a clear plastic case and the usual manuals in the box. There’s nothing really surprising here.

I know many will disagree with me on this, but I think MIUI 12 based on Android 11 is one of the best Android ROMs right now. From the visual design to the customization, it’s just wonderful to use. It’s one of the fastest and smoothest versions of Android I’ve ever used, and Xiaomi doesn’t include a bunch of redundant Xiaomi-branded apps, relying on Google’s default apps wherever possible. There are about 10 or so bloatware apps and games, which are incredibly annoying to see included in phones in 2021, but they can be uninstalled.

I’m happy with MIUI 12, but Xiaomi is launching MIUI 12.5 soon with lower CPU usage and better battery life. Xiaomi is also adding a dedicated rendering thread for the UI, to give the already smooth interface a little extra speed. MIUI 12.5 will even let you uninstall or remove all but the seven core system apps. It’s not a huge overhaul, but it should make the phone feel even better, and it’s nice to know Xiaomi working on letting these phones age gracefully. This is especially good since Xiaomi isn’t promising more than 2 Android and security updates. It usually backports newer versions of MIUI to older Android versions, but that’s a half-ass way of updating phones.

While I’m a fan of MIUI, the ads shown in some regions are an ongoing frustration. I don’t get any ads on my European model set to the US as a location, but they’re prevalent in some markets, and seeing ads for different apps while installing apps is just straight-up annoying. Usually, it’s pretty easy to disable them, especially in India where there’s a dedicated option. Even with an opt-out, there’s no reason to have ads built into a $750 phone.

As for performance, the Mi 11 is as fast as any other Snapdragon 888 phone. There are no slowdowns or stuttering and apps load almost instantly. I did notice the phone would get hot under longer sustained tasks, like recording video or taking a lot of pictures, but it wasn’t uncomfortable or worrying. I don’t play many games on my phones, but when I loaded Fortnite, it performed well at the highest settings. It got a little toasty, but it didn’t stutter or drop any frames.

MIUI has historically had pretty aggressive RAM management, and that still seems to be true. I wouldn’t get any music apps closing in the background, but while opening my email, Twitter, or even Chrome after a few minutes, everything would reload when opening again.

Battery performance is good, letting me get through most of a day, but I’ve had to charge it before bedtime on occasion. The charging is really fast at 55W (wired) charging with the included charger. It would fully charge the phone in around 50 or so minutes in most of my testing. The phone also supports 50W wireless charging with Xiaomi’s custom charger (which I don’t have to test, sadly). Xiaomi does say it should take about 50 minutes to fully charging the Mi 11 wirelessly at 50W, though. Over USB PD, it ends up just using Qualcomm quick charge tech at 18W.

Xiaomi put the year-old Samsung ISOCELL HMX sensor in this phone. It has 4-in-1 pixel binning and outputs 27.1MP photos, producing detailed photos in well-lit situations but the quality degrades with worse light resulting in dim, fuzzy photos. The dynamic range is good, but has some issues with extreme highlights and shadows.

With the Mi 11, Xiaomi spent a lot of time focusing on video and gimmicks around that. There are a few movie magic modes that are fun to mess around with (and make good TikToks), but that’s about it. On the more useful and professional side, Xiaomi supports recording video in a pro LOG format, which applies no tuning and extends the dynamic range for better editing. It’s all around really good for video.

I’m impressed by the main sensor, but the ultra-wide and telemacro cameras leave me cold. The ultra-wide just lacks detail compared to other phones. The telemacro is a weird combination between macro camera and telephoto which seems to do fine as a macro camera, but not as well as a telephoto shooter. Xiaomi upscales the 5MP sensor to 12MP for the telemacro, just adding to the overall weirdness of the camera. Xiaomi could have really used a proper telephoto camera and a closer focal point on the ultra-wide, like most other flagships this year.

What I would really have liked to see is better software integration with apps like Snapchat, Instagram, and TikTok. These apps are widely important and honestly, the camera looks like crap when using these apps. You shouldn’t have to figure out how to record in the main camera, export from there, then import into another app to be able to get great image quality in some of the most popular apps around the world.

Yes, if you aren’t in the US. The Mi 11 is one of the best phones I’ve ever used. Even though it’s not the top of the Mi 11 product line, it easily competes against the OnePlus 9 Pro, S21 Ultra, and Find X3 Pro.

If this phone supported US networks, I would probably daily driver this until the Mi 11 Ultra or Mi 12 comes out. I like it so much I’ll put up with the lack of US cellular bands. I can get a connection to the T-Mobile network, but most of the time it’s on 3G and has almost unusable speeds. It only gets LTE occasionally for me, and there’s no US 5G support at all. If you’re in a city, it might work a little better, but you should just buy a phone designed to work on US mobile networks.

At $750 (£649.00), I think this phone is a pretty great value. It’s still expensive compared to some other Xiaomi devices, but it’s probably the best value of the current Snapdragon 888 phones. Despite the ads in the system and weird telemacro camera, I’d still recommend the Mi 11 to anyone in Europe or Asia looking for the latest mobile hardware without breaking the bank. 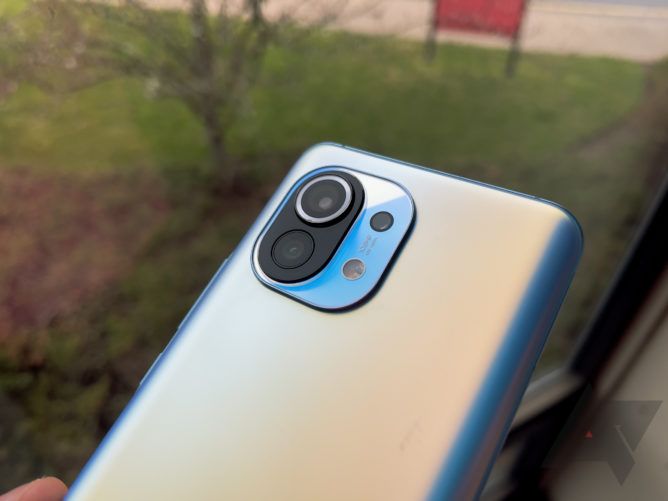