After years of big-name brands like Apple, Samsung, Bose, and OnePlus dominating the wireless earbuds conversation, there’s a new contender in the space: Nothing.

Based in London and founded by OnePlus co-founder Carl Pei, Nothing made a bit of a splash this summer with the launch of its inaugural product, the Ear (1) wireless earbuds.

At just $99 and with a truly sick design, Nothing’s first foray into the crowded wireless earbuds market gets a whole lot of things right. Functional active noise cancelation meets above-average sound quality in a pair of earbuds that aren’t married to any particular mobile operating system. That said, the Ear (1) buds still feel like a first step in many ways. A few small performance issues and a light feature set hold them back from greatness but you can do a hell of a lot worse for that price.

I just love looking at these.
Credit: molly flores / mashable

I should state upfront that Nothing’s debut device is a truly normal and kind of boring pair of wireless earbuds in everything but form. But man, that form is something else.

Nothing went with transparent plastic casing for both the entire charging case and parts of the earbuds themselves. The design is reminiscent of what were objectively the coolest models of the Game Boy back in the ’90s. There’s something about seeing the internal guts of a device laid bare that just works for me.

The earbuds themselves are shaped roughly like Apple’s AirPods Pro, with an egg-shaped body giving way to silicone ear tips on one end and protruding stems on the other. The body is white plastic, but the stems use the plastic casing to expose the tech inside.

No caveats here: The design of the Ear (1) is rad. They’re probably my favorite looking wireless earbuds around, though it’s not like the competition is especially stiff. Samsung has put in a couple of solid efforts at making earbuds fashionable with the Galaxy Buds Live and Galaxy Buds 2. But aside from that, earbuds tend to be pretty utilitarian in design. I respect Nothing for really going for something on its first try.

Function wasn’t sacrificed for the sake of form, though. These earbuds are reasonably comfortable for long listening sessions, and they come with two extra sizes of ear tips in case the default ones don’t work for you. Silicone tips are always the way to go; hard plastic rubbing up against the sensitive skin inside the ears can get irritating fast. That’s not the case here.

Thankfully, neither is the annoying device exclusivity you’ll find with many other pairs of wireless earbuds.

The app isn’t much, but it’ll do 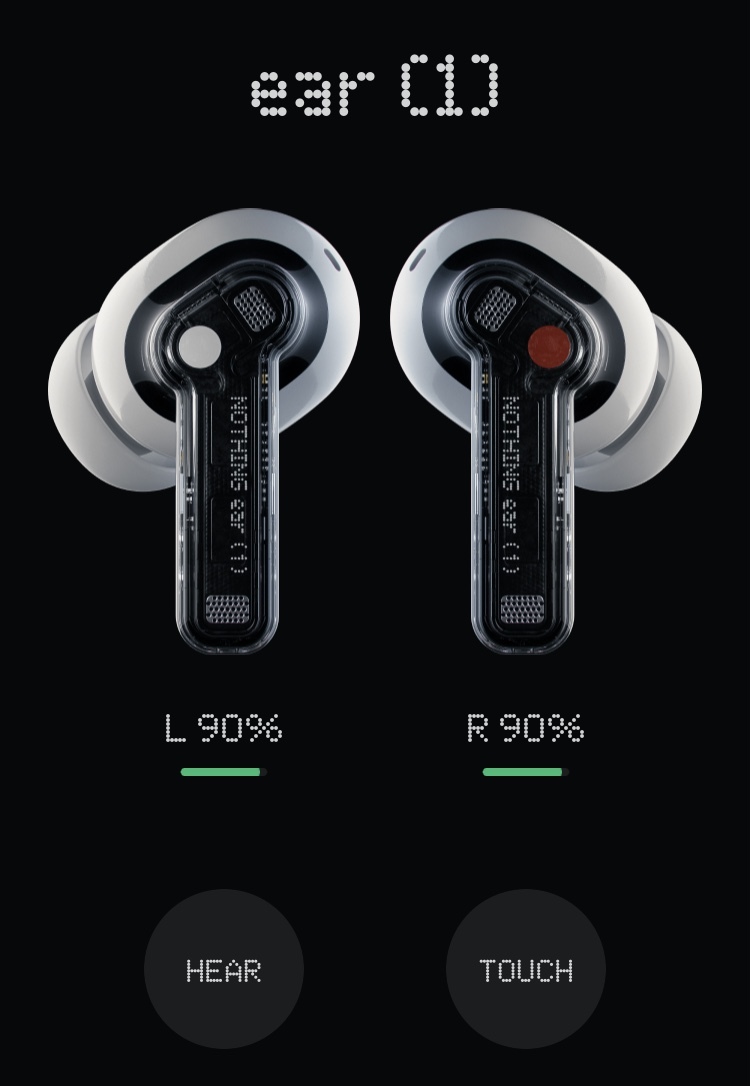 The app does what it’s asked to do, which isn’t much.
Credit: screenshot: nothing

As has quickly become par for the course in the wireless earbuds game, the only way to get a detailed battery readout and change settings for the Ear (1) buds is to download an Android or iOS app. Nothing’s effort here is about as barebones as it gets, but what’s here works just fine.

With the app, you can see how much battery is left in each bud and lightly customize the touch controls. A double tap on either earbud’s stem will always trigger playback/pause, but you can change a triple tap to either fast forward or rewind. Tapping and holding by default will switch between the different noise cancelation modes, but you can also turn that off.

If you want more specific control over ANC, the only other menu in the app takes care of that. You can manually switch between ANC (with “Light” and “Maximum” versions of it), a transparency mode that uses onboard microphones to amplify outside noise, and simply turning all of that off. There’s also an extremely basic equalizer here with options for enhanced treble, bass, and vocals, but that’s it.

A tad bit more control over touch commands would’ve been appreciated here. Aside from that, I don’t personally need much more from a wireless earbuds app. The last thing I want to do while listening to music or podcasts is fiddle around with menus.

While the simplicity doesn’t bother me, the somewhat buggy nature does. I noticed a few instances where switching between listening modes in the app wouldn’t work as intended. For example, I’d toggle ANC on or off and the setting wouldn’t take hold, so I’d have to do it again for it to work. While this isn’t the norm, it happened to me enough times that I felt the need to point it out here. 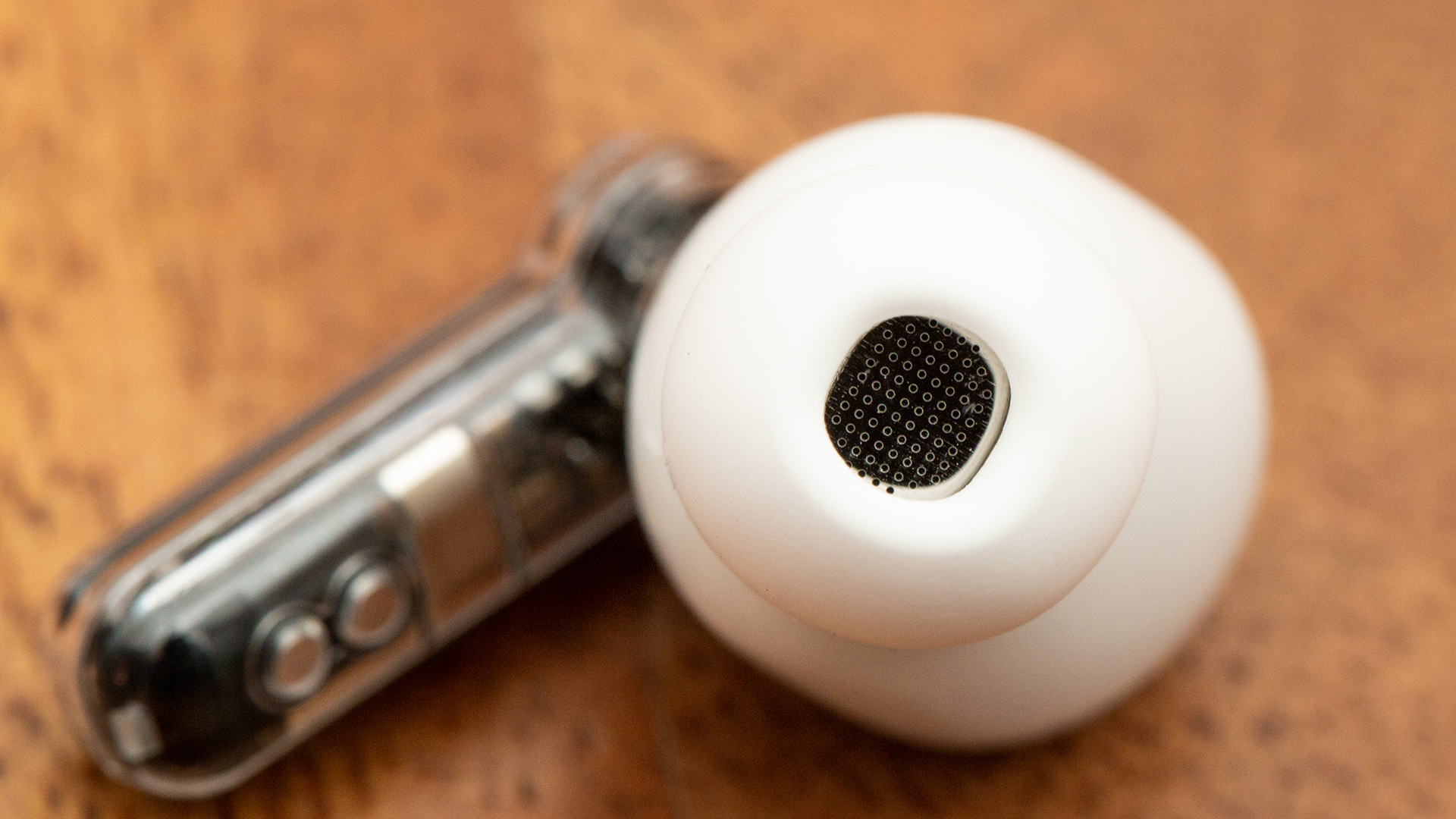 When the Ear (1) earbuds work as intended, the listening experience is fine, if not especially remarkable. You can get a decently big and booming sound out of them, with surprisingly thumpy bass at times.

I’ve been obsessed with the latest CHVRCHES album Screen Violence for several days now and standout tracks like “Final Girl” pop off in these earbuds. I do find it a little bit difficult to track down the subtler elements of dense compositions here, so I probably wouldn’t recommend the Ear (1) buds to serious audiophiles.

But that’s kind of a ridiculous standard for a pair of $99 earbuds. For normal people, the sound quality is more than adequate. I can say the same for ANC, which blocks out a substantial amount of noise, though it stops just short of the recent standard set by the Galaxy Buds 2 in this price range. Transparency mode is strong as well, making conversations with cashiers in packed bodegas easy without needing to remove either earbud.

The problem is these earbuds don’t always work as intended. I’d peg them as effective about 85 to 90 percent of the time, but there were a few too many audio disruptions for my liking. Bluetooth interference isn’t uncommon for wireless earbuds, but I noticed a few more brief outages while out in the streets of Brooklyn with the Ear (1) buds than I have with some of the other recent competition. Beyond that, I had one listening session while out on a walk where the play/pause sensor in the right earbud acted funky, falsely thinking I had removed the right earbud and pausing music repeatedly.

That particular problem only happened to me in one session, so it’s certainly not the norm or anything. But there do seem to be a couple of engineering hiccups with the Ear (1) buds that make them just slightly less than optimal sometimes.

Another very slight bummer in the performance department is the battery life. I got a little less than four hours of continuous listening with ANC on from a full charge, which is about a half hour less than the competition. I don’t expect a pair of wireless earbuds to get me through a full work day or anything, but this is probably the biggest disadvantage Nothing’s buds have compared to its peers.

Killer for the price

Even with some technical faults, Nothing has its closest competition beat in price, and it’s not particularly close. If you want to spend less than $200 on good wireless earbuds with noise cancelation, these are your non-Nothing options:

For the extra $50, the earbuds from Samsung or OnePlus are just better devices, if for no other reason than they’re more technically sound and have more features. But if I were seriously considering buying some ANC-enabled wireless earbuds and had to pick from that lineup, I’d probably go with the Nothing Ear (1). The sound quality isn’t best-in-class but it’s as crisp as you can expect for $99. Pair that with effective ANC, no device-exclusive features, and a seriously slick aesthetic, and the value is obvious.

Even with some bugs and an admittedly mediocre battery life, the Ear (1) is still a nice starting point for Nothing. The company’s clearly done something right when its very first product is genuinely recommendable over some of its closest competition. Besides, anything that hearkens back to the sweet transparent Game Boys of my youth is a win in my book.