The England and Manchester United player has been subject to racist online abuse, along with footballers Jadon Sancho and Bukayo Saka, after missing a penalty in the 3-2 shootout loss on Sunday.

Posting the letter on Twitter, Rashford shared his thoughts on missing the penalty during the Euros finale. “I felt as though I had let my teammates down. I felt as if I’d let everyone down,” he said. “All I can say is sorry.”

After acknowledging his teammates and the team spirit on the England squad, Rashford went on to allude to the abuse he’s faced. “I’ve grown into a sport where I expect to read things written about myself. Whether it be the colour of my skin, where I grew up, or, most recently, how I decide to spend my time off the pitch,” wrote Rashford. The footballer spent much of 2020 campaigning to extend free school meals to disadvantaged children during school holidays in England — a cause close to his heart as he relied on school meals during his own childhood. Children receive free school meals during term time, but not during the holidays. Rashford also promoted reading and literacy for all children across the UK.

Rashford ended his letter with a powerful, poignant conclusion. “I can take critique of my performance all day long, my penalty was not good enough, it should have gone in but I will never apologise for who I am and where I came from,” he wrote. “I’m Marcus Rashford, 23 year old black man from Withington and Wythenshawe, South Manchester. If I have nothing else I have that.”

Rashford, Saka, and Sancho were all inundated with racist abuse on social media following Sunday’s match — with many people attempting to drown out the harassment with positive messages of support and love for the players.

After a mural of Rashford in his hometown of Withington, Manchester, was defaced on Monday, residents rallied to cover the vandalised artwork with letters and post-its of support for the player.

Messages of support posted on the mural of Marcus Rashford after it was defaced by vandals.
Credit: Christopher Furlong / Getty Images 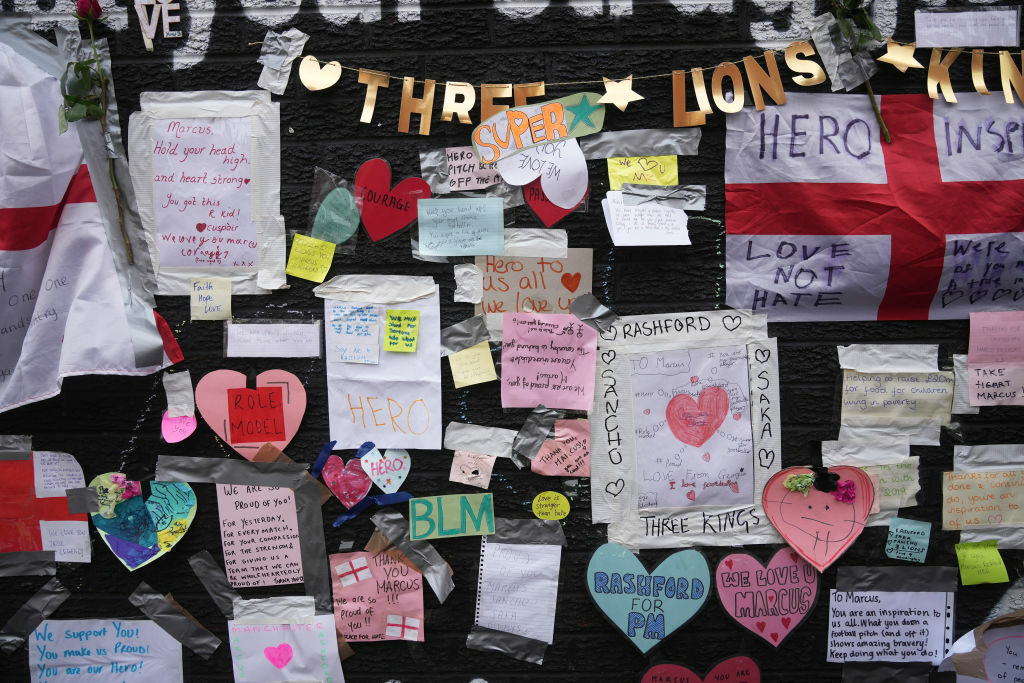 Messages of support are left over the graffiti on the mural of England footballer Marcus Rashford which is displayed on the wall of a cafe on Copson Street, Withington.
Credit: Christopher Furlong / Getty Images

Following his letter, Rashford posted photos of moving letters he’s received from children following Sunday’s match. “I hope you won’t be sad for too long because you are such a good person,” wrote one 9-year-old fan. “Last year you inspired me to help people less fortunate. Then last night you inspired me again to always be brave. I’m proud of you, you will always be a hero.”

11-year-old Alfie wrote, “I admire you and so should the rest of the world.”

They’re not wrong. Rashford is a hero.